Handwashing video is a good one. If you get tired of "Happy Birthday", there's always the Menards song, "Save big money, you'll save big money, when you shop Menards. Plumbing, electrical appliances too, etc." Make sure you sing the whole thing, no shortcuts. ;)
Top 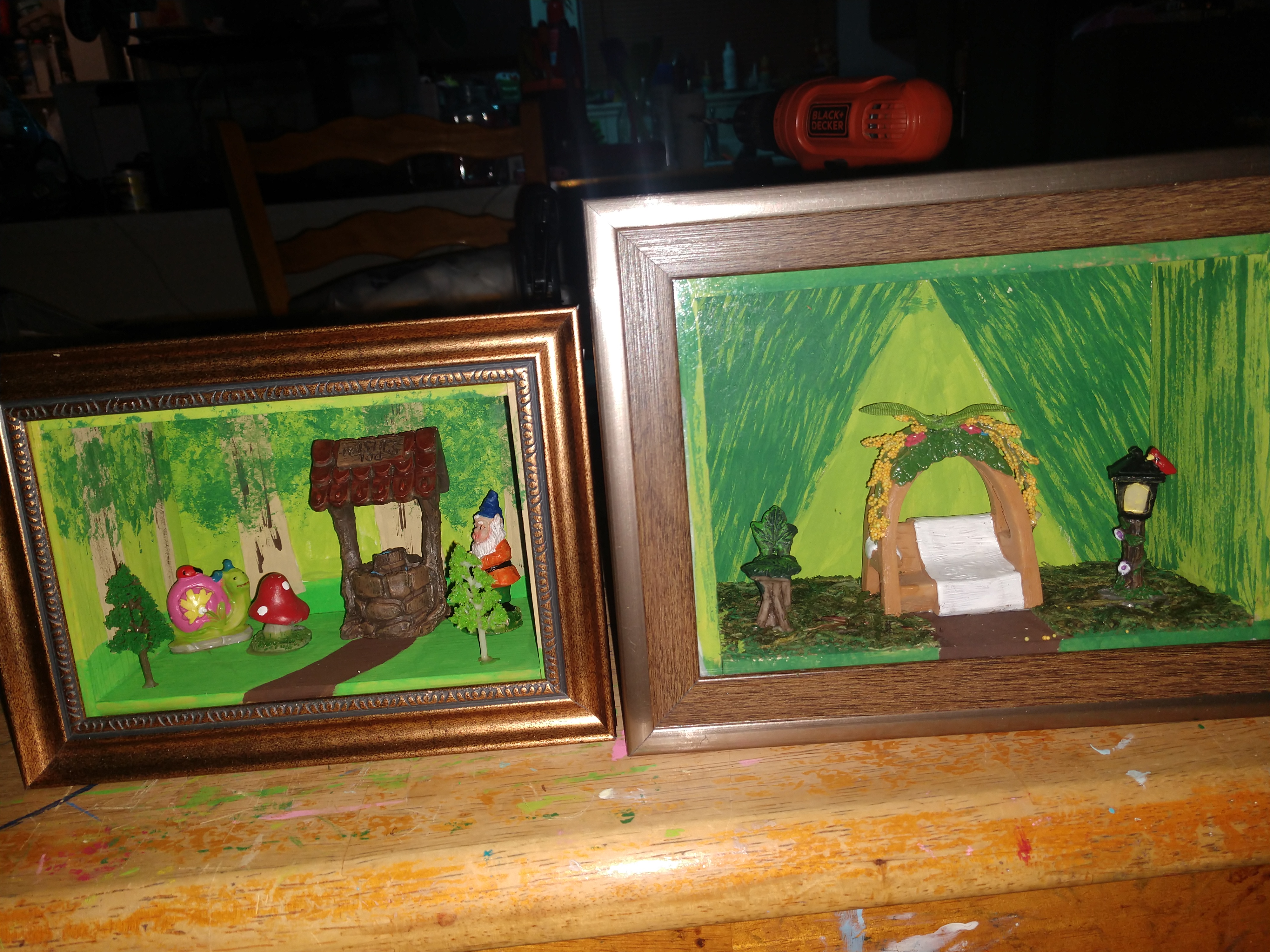 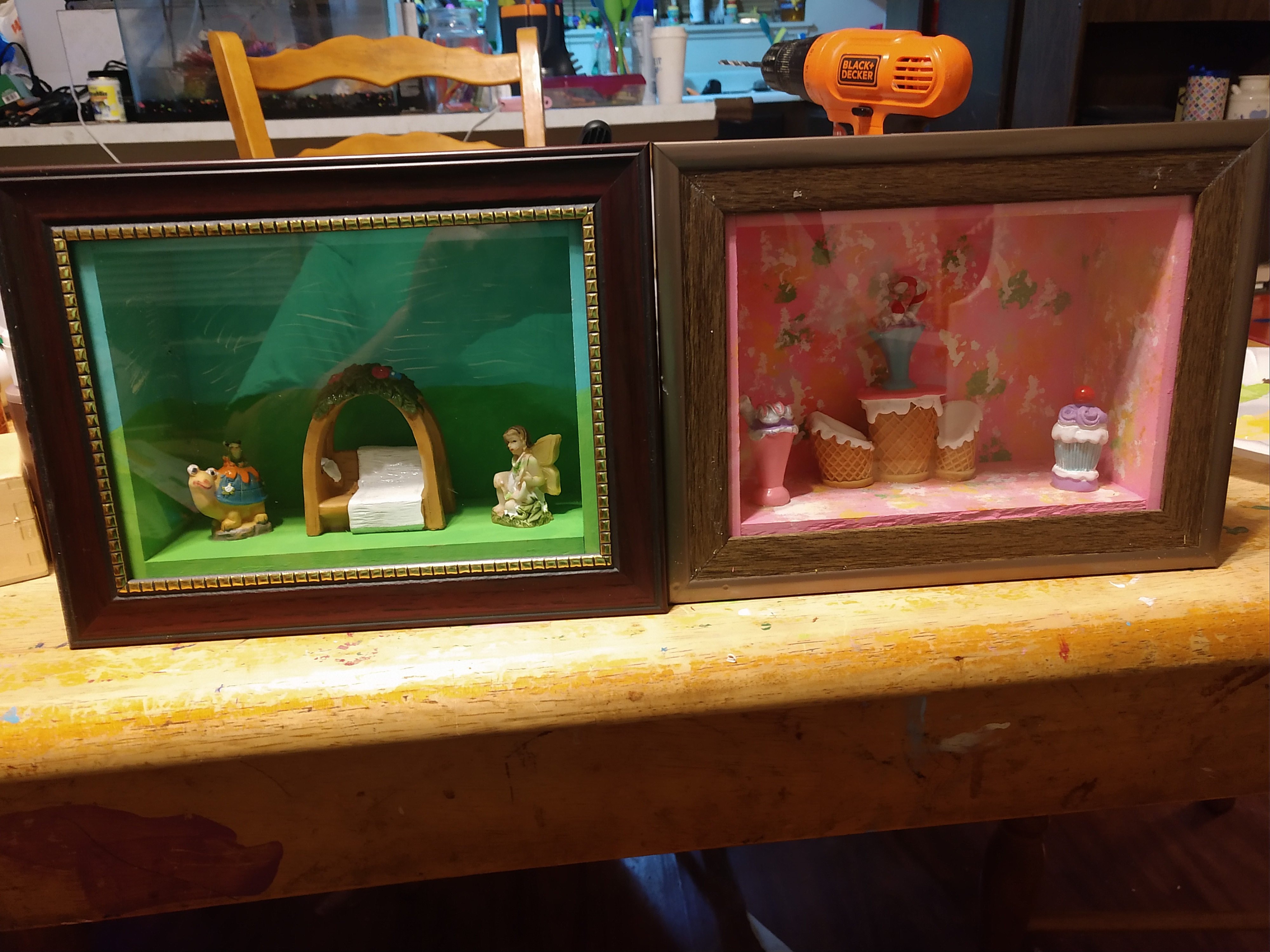 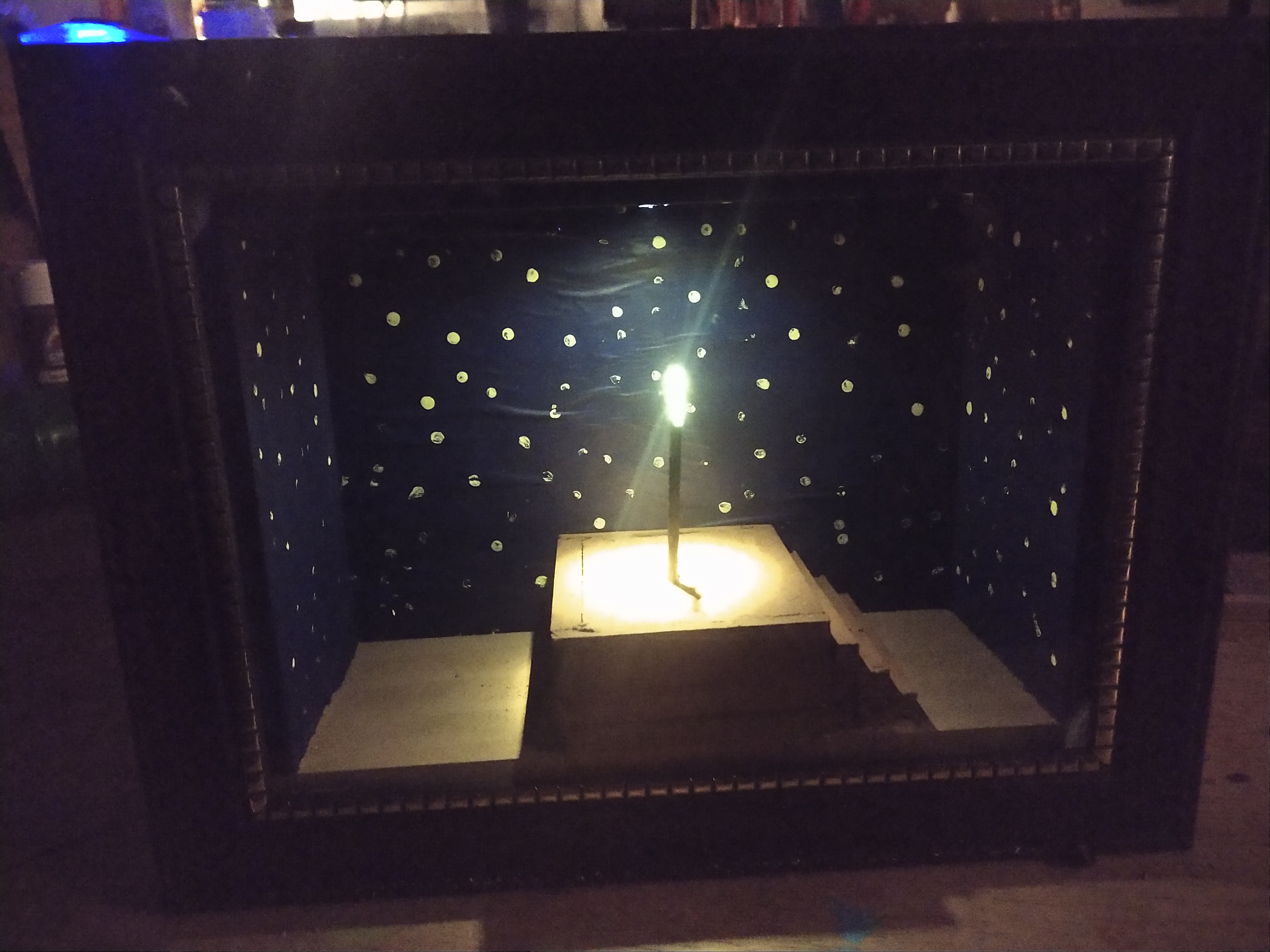 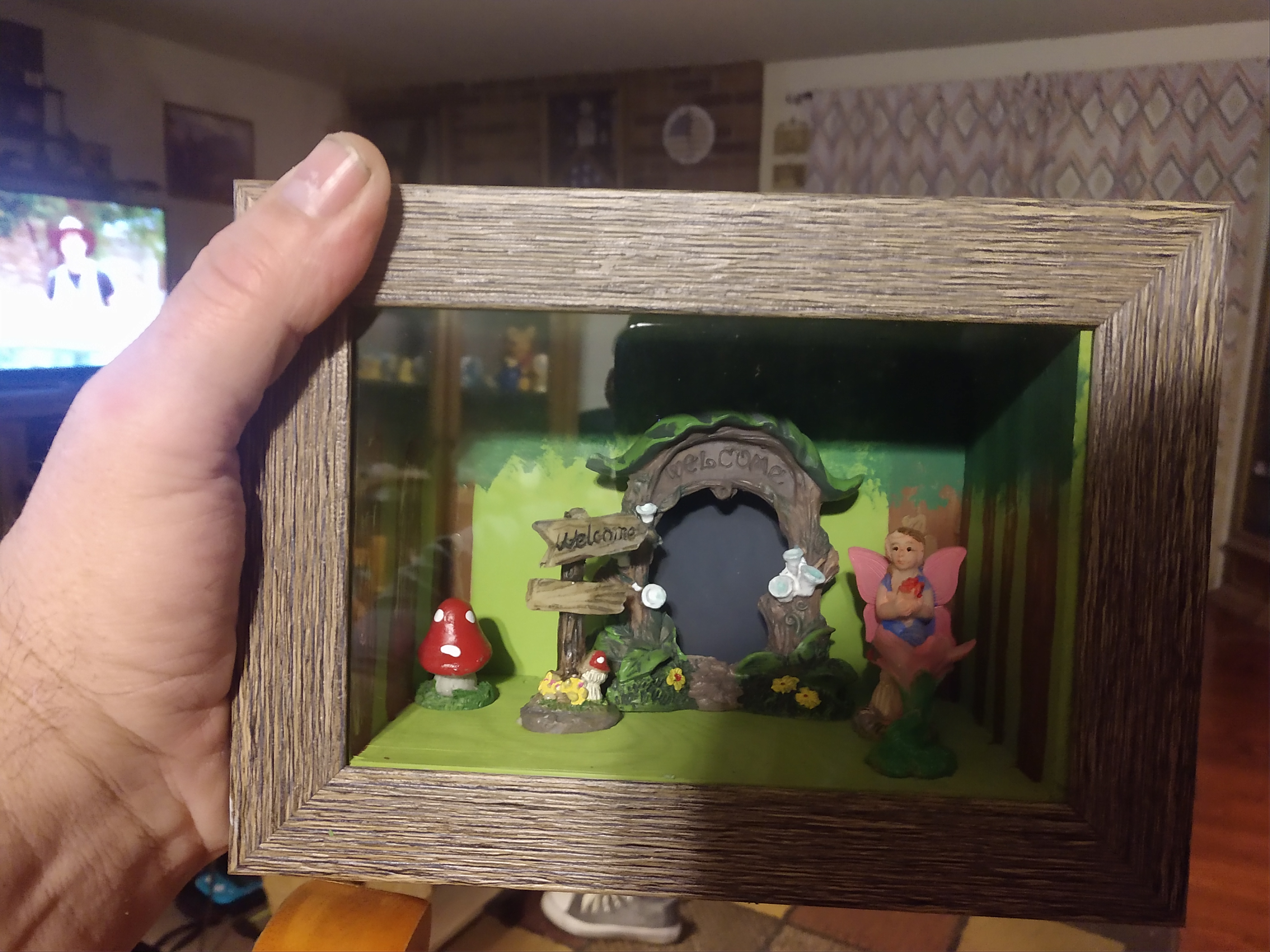 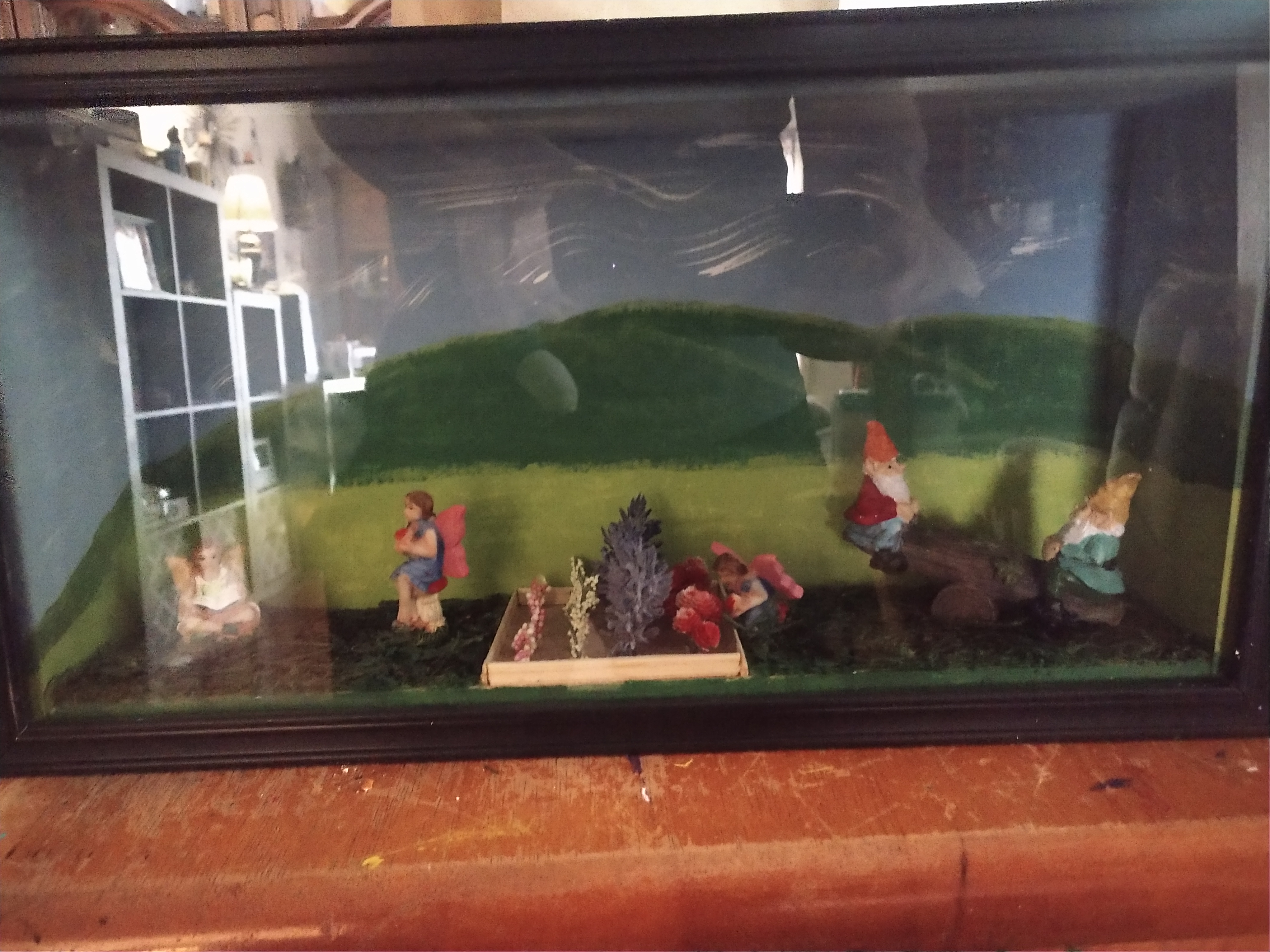 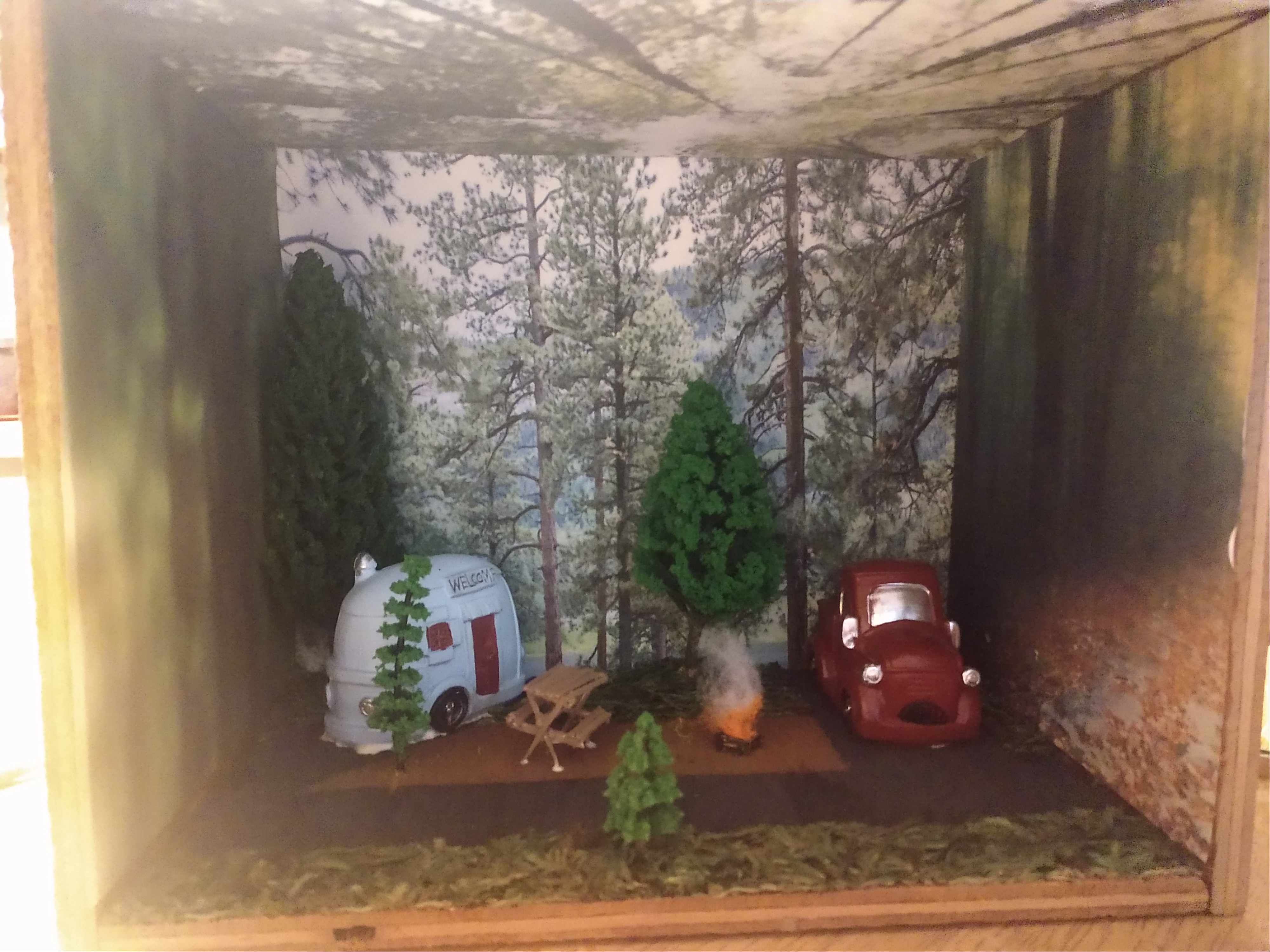 These are some of the dioramas I made while on quarantine. I've been collecting the frames, materials and various decorations for some time now. I just haven't been able to find time to get them made. Some even have LED lighting to make a better effect. Arts and crafts are a good way to pass time!
Top

Wow, you are quick! It would have taken me some time to put those together.
Top

Is that hay I see on the ground in some of them?
Top

No hay. One of them has artificial flowers that I used to make a flower garden. The camping one has artificial turf material. I have plenty of time to figure out what to put in them and plenty of things to choose from. The wooden boxes are made from reclaimed materials. I'm killing time, staying busy and helping the environment. That does give me an idea for a diorama though.
Top

I got that email a few days ago as well and went ahead and ordered to get on the list, as I only have 3-4 weeks of food left. Dan had mentioned backorders would help them know how much they needed.

That said I order just about everything via Amazon, and according to Amazon it is arriving on Monday. I was really surprised since KMS said they were out. We’ll see if it actually shows up! Amazon still shows a few left in stock as of today.
Top

I hope you are able to get the supplies you need!

Hey, did you know if you order through the link at the bottom of the page (click on the link to get to Amazon), a small portion of your purchase will help fund Guinea Lynx? (at no extra cost to you) It is a great way to help that doesn't cost anything!
Top

Thanks for the reminder, Lynx!!
Top

I order from Amazon regularly too. I'll do it from your link from now on.
Top

Thanks! It ends up being tiny bits but does add up.
Top

https://guernseypress.com/news/2020/03/25/two-guinea-pigs-dumped-at-gspca-one-pregnant/Not sure where else to post this link because I'm assuming it is a result of coronavirus. This makes me sad and angry at people. I've thought about posting an ad offering to help foster unwanted guinea pigs so that people don't abandon them. Our humane society is closed due to coronavirus so they aren't taking in any animals right now. It would overwhelm me somewhat and keeping the females separate from the males would be a challenge, but I think it might be better than them being abandoned. Is anyone else thinking of doing this.

The pigs in the link look to be in the UK. If any of our members are close by and have the means, maybe they could help those little ones. I checked Craigslist for my area and didn't see any guinea pigs being rehomed, so hopefully it's not an issue here yet.
Top

The financial hardships will be so severe in the coming weeks (and even now!). It makes me sad that our guinea pigs may suffer. I hope people can help out.
Top

I can and I will. I live in Reno Nevada. If anyone in the surrounding area needs foster care for their guinea pigs, I would be happy to take care of them until permanent homes can be found.
Top

That link is for Guernsey which is an island in the English Channel and is closer to France than the mainland UK. That may make it difficult to find a suitable foster home.

I will hit up one of my contacts in the mainland UK but I doubt they will be able to help during the lockdown.
Top

Last month (Feb), our whole family became ill with symptoms that matched 100% with COVID-19.  Our son-in-law, who lives in the same house, had taken an Uber ride with a driver who had arrived here from China the same day and had also been transporting people from LAX (where early cases were detected).  Within the time frame for the incubation period, our son-in-law became ill, then we all got it from him.  We were unable to test, but our doctor feels that we did indeed have the dreaded virus.  We did self quarantine for four weeks from when we first felt ill, so hopefully we did not pass it on to anyone else.

As careful as we were with hand washing up to our elbows before handling anything for our guinea pig Hugo, he too fell ill and passed away.  Hugo was over six years old, so it may have been coincidental.  That said, he had been in great shape and very spunky before this incident.

One thing that all of our family members did experience was the loss of smell and/or taste before we felt sick.  I just wanted to pass this on, so if anyone out there suddenly loses their sense of smell/taste, they will know to quarantine themselves, even if they don't feel sick yet.
Top

Oh know, PinkRufus, I'm so sorry! Your poor family. How is everyone doing now? I'm so sorry that you lost Hugo, too, on top of everything else. Did he have any URI symptoms?
Top

I am so sorry you were all so ill and that you lost Hugo, PinkRufus! This had to have been a very difficult time for your family. I wonder how many people that person infected.
Top

Thank you Sef and Lynx. All of the human members of our family have recovered.

Hugo did show signs of URI, but only briefly, he crashed quickly.
Top

I'm glad you and your family have come through it ok. It must have been a terrible experience. Poor Hugo. There was just nothing you could do about that situation.
Top

What a scary experience for your family, PinkRufus. I’m glad your human family recovered but I’m so sorry you lost Hugo.
Top
Post Reply 94 posts