What a clever, sweet boy Binky is. Quite the heart stealer!
Top

I spoil my piggies too LOL.
Top

It's been a long time since I made a vid of Binky, so here it is!

He's as handsome as ever! I love the soft tunnel you have strung across his living space. He is such a curious fellow.

It was a very quiet video (no sound for me - I hope my computer is still working!).
Top

I wonder if YouTube dimmed the sound, as it's much quieter than the original which I uploaded.
Top

That was fun!
Top

I had some very clever pigs in the past, but have to say Binky tops them all. Not only does he completely disregard his instinct to hide illnesses, he will also inform us non verbally when he wants something done, like move a hidey, or a sleeping bag, by grabbing it with his teeth only when we are watching him, and staring at us. When we do as he intended, he popcorns.

He often is too inquisitive when the cage gets cleaned, up to a point that he's in the way constantly. We say "No" and "Choo" to make him go away for a few secs. Last session, he was a bit too much and told him "Do you mind??? Go and sit with Dollie till it's done and you will get a treat!" So he did instantly. Never underestimate a piggie's brain!

He had an ear infection twice, which took a lot of hassle to get rid off. He developed a new funny thing with all that ear fuss. When he has to go back to the cage, I kiss him and he wants me to kiss one front paw, he puts it on my nose. I then kiss his paw (ignoring where it has been, I can deal with that after, lol) and he smiles at me.

But today, he had hub in stitches. Hub is the one who taught each pig to drink from the bottle when they are inside a hidey, so they would drink when they would become ill as well. Binky has his hummer this week, and it has 2 windows at each side. After the drinking session, Binky usually gets a treat through the other window. He hopped to the other window to get a treat, so hub stuck the water bottle nozzle back in in window nr 1. He hopped to the nozzle, tapped it with his teeth, hopped back at window nr 2. That was "I had my drink already, Pappi, now give me a treat!" notification.

Here he is, helping Pappi to work from home. 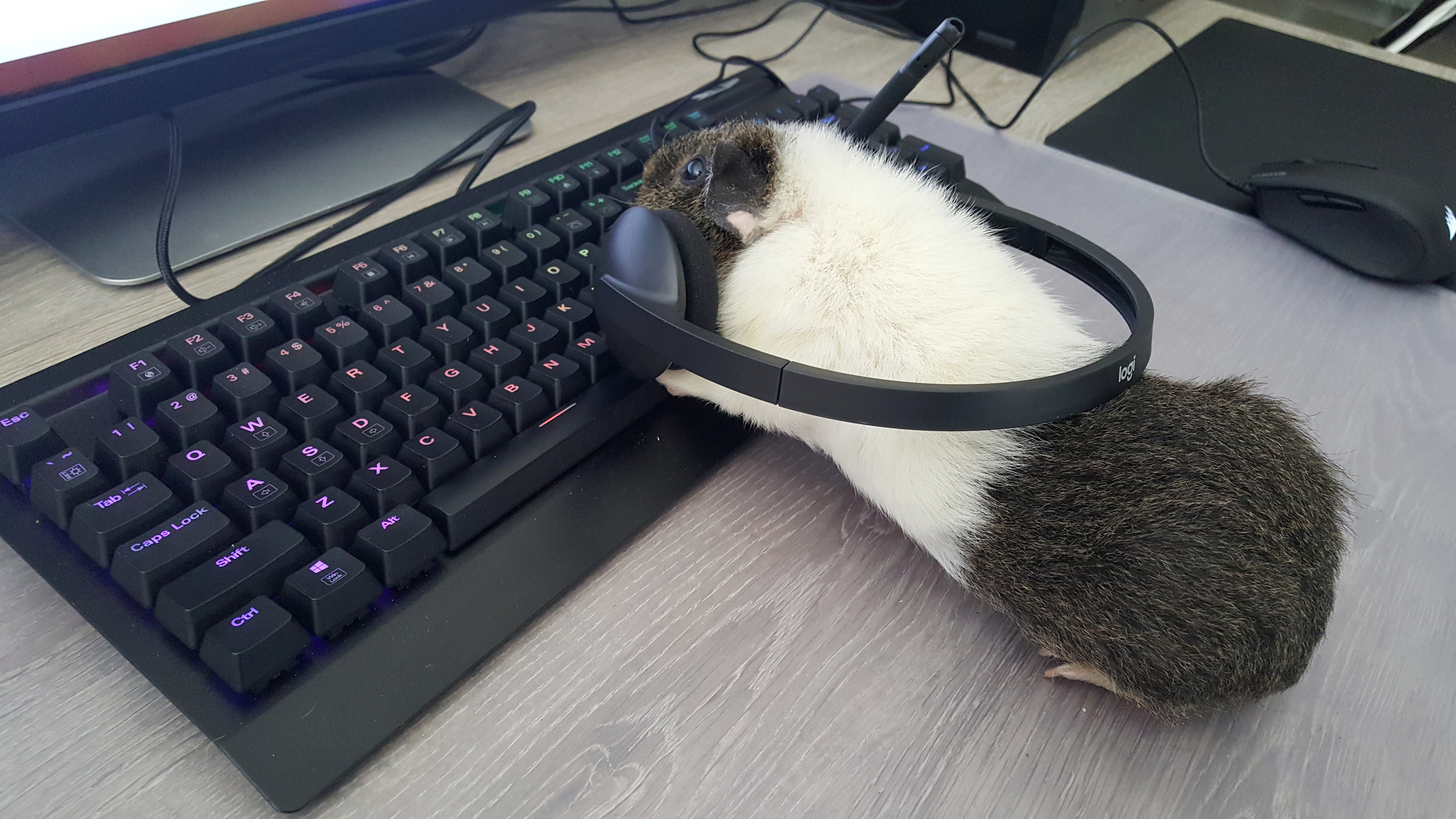 Really, he is an amazingly communicative pig. And smart too.
Top

What a cutie!
Top

I'm afraid that all my pictures will disappear soon. I keep getting harassed by Photobucket to pay, claiming I host pictures. I don't. I also refuse to pay for storing low resolution pictures with a trademark on top. I am sorry that my topics will no longer contain pics.
Top

It is indeed sad to have photobucket make life difficult!
Top

That's such a shame. You have the best pictures of your piggies.
Top

Pigjes, you could sign up for an Instagram account and store some photos there. A personal account is free, and you can make the account private if you don't want to share photos with strangers. Also, OneDrive has a free app that gives you 5G of storage for free. You can store anything, files, videos, or photos.
Top

ItsaZoo, thanks, we already use Imgur and Instagram and OneDrive. But there is no way to replace the pictures I made in my 3 topics here. Even if I had access to edit old posts, it would be a daunting task.
Top

Okay, I get it. I wasn’t thinking about the links in your posts, just storage in general. I should really get more sleep.

There is a always giant clock above the cage. Summertime happened from Saturday over Sunday night in Belgium. Guess who was ready for lap time at 7.30 sharp, as he is each day, no matter the clocks changing? No, we were not watching any program which could indicate time. He does this every time when the clocks change, back or forth! You should have seen the look on his face, like "Well?????", we were hurling from laughter! Binky can tell the time!!!
Top

How do they do that? Ours is the 3:00 pm break when I have an apple. At 2:30 she’s getting antsy. We set our clocks ahead and she’s right on time pacing and wheezing. We do have a clock that has a different bird song every hour, but she starts on the half-hour, so it’s still a mystery.
Top
Post Reply 434 posts