Fuzz's messier poops are passing. I've been giving her (approximately) 0.25 cc of the Bio-Sponge and I'm pretty sure that's what is helping her. I've even had some hideys NOT get messed up every night! She hasn't been at this lighter level of messiness in months. We ran out of the Bio-Sponge, so I've started the count over - 5 days, 3 times a day. If that completely clears her up, then we'll stop the Bio-Sponge to see if her poops don't stay nice and firm. Lucca at Platinum says that if necessary, Fuzz can have as little as she needs to keep the poops firm, even on a daily basis. To my amazement, Fuzz takes it like a champ, if I can get the nozzle far enough back. She's become the sweetheart I always wanted.

Although the fungus *appears* to have cleared up, I see a bit of scratching, especially Dusty, on her tummy. No missing fur, just seems like I see her do it often. And then there's the water... I'm not sure but I think she's drinking a lot more. Or playing with it and soaks the fleece below the water bottle. Actually that only happened one time and might have just been a defective cap. I changed it and have had no real "soaks" since. I still see Dusty at the bottle more often than the others. I'm watching for signs of pain or hair-pulling on her sides. If I see that, I'll know to get her into the vet ASAP to be checked for cysts.

Belle is her normal quiet, sweet self. She usually lets the others push their way into the line ahead of her, to get the Vit C tabs, so I try to make sure she's first now and then. She's just so quiet. Likes to bury herself in the hay pile. I mean *really* likes it!

I'm going to try for photos soon. Never tried a three-some but I want to, and will. Dusty is just a smidge smaller than Fuzz and you'll see the difference between her and Belle when I actually get some shots. Dusty is only a week older than Belle but Belle is a good 50-60 grams smaller than either of the other two. And no, she's not being pushed away from the food.

Thank heavens the cats are healthy! At 9.5 +/- pounds each, I hope they quit growing soon! Already nine months old!
Top

Looking forward to photos. And so glad the Bio-Sponge is continuing to help!

I bet your cats are still giving you trouble ;-)
Top

All 3 of my furbabies are doing well. Belle seems to get more beautiful by the day. 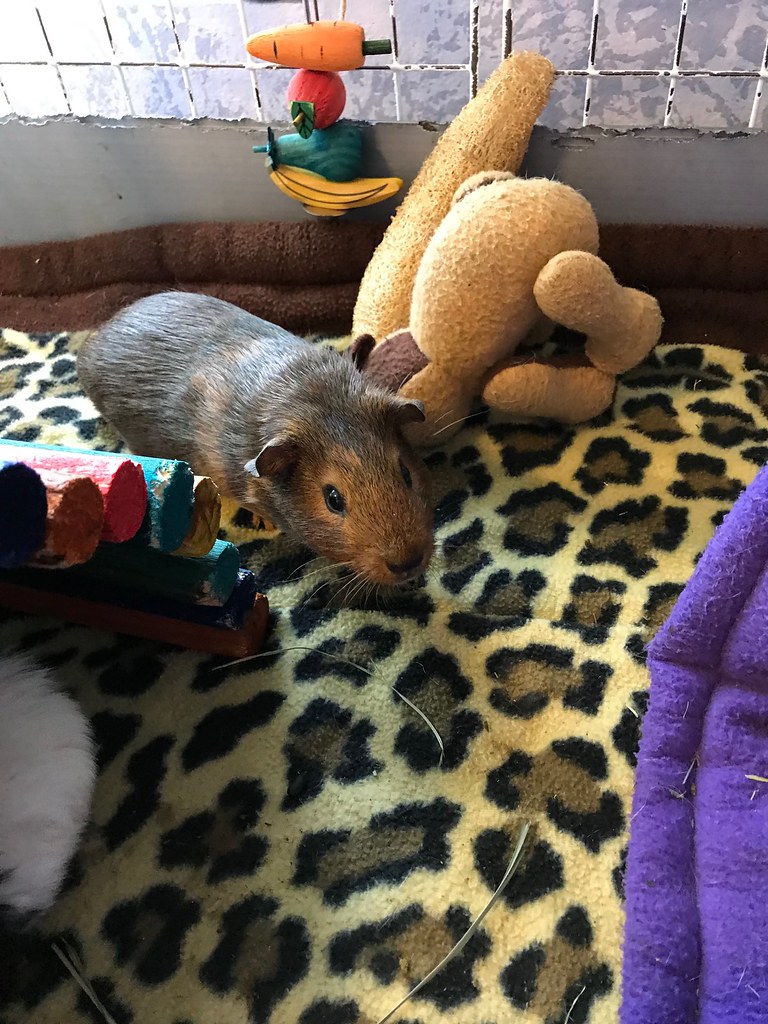 Dusty is also very pretty, if hard to photograph. 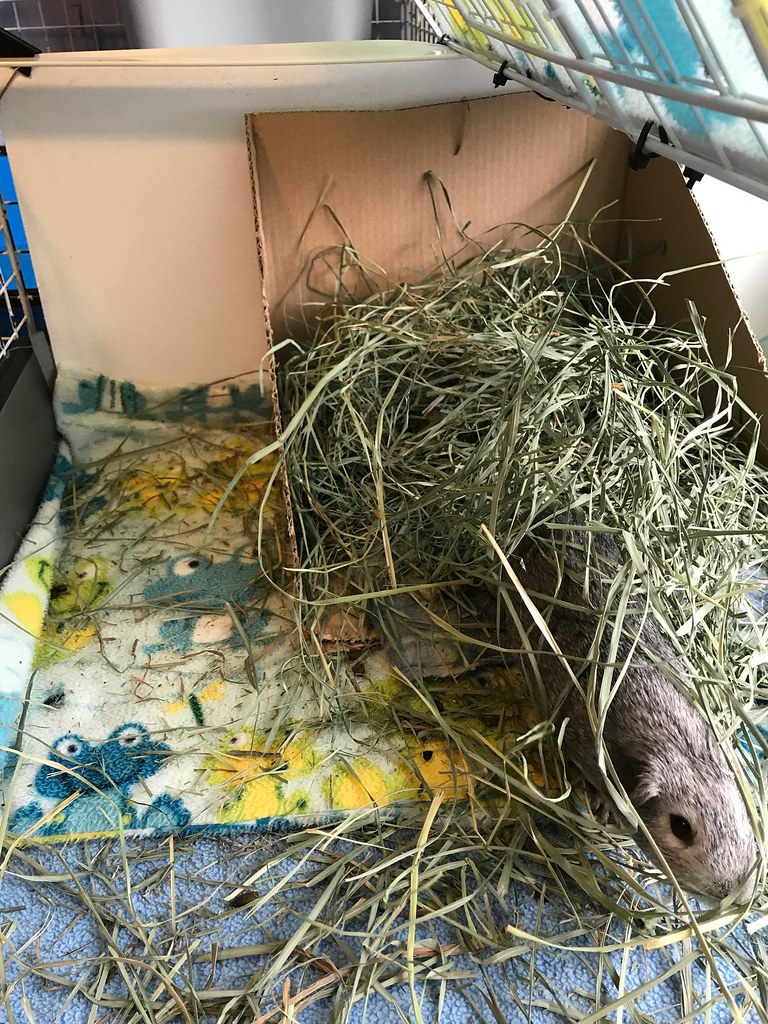 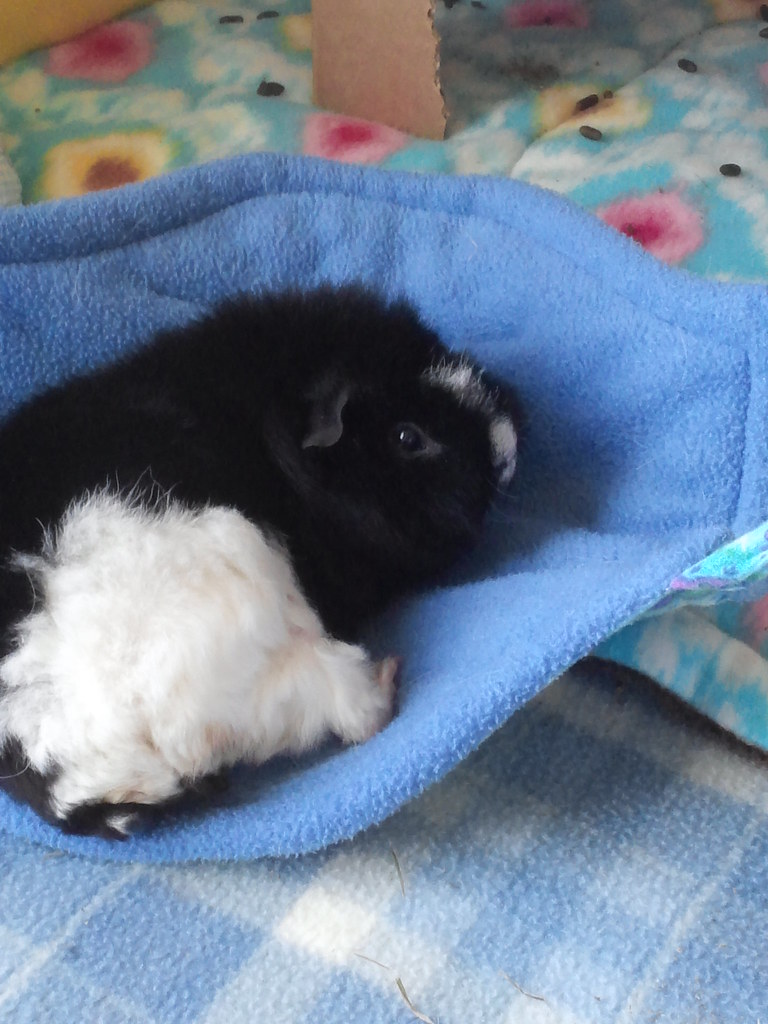 Actually, I'm very proud of Fuzz lately. Her poops have finally firmed up *again*. She is still steadily losing weight though. Below 1000 grams now. I've been feeding her Critical Care, but there is no *force-feeding* about it. I mix it up in a small bowl (1 tbsp at a time), put it in front of her and she just sticks her head into the bowl and begins eating. She usually eats at least half of that at a time, along with all of her regular food. I'm really hoping she can at least maintain the 950-1000 gram weight. She's so bony. It's sad, comparing her weight to a year ago - 1200 or 1300 grams. She'll be 5 yrs old on Dec 2. I don't really know what to expect as far as age changes go.

Peekaboo was my oldest (adopted as an adult and I have no information of what his early life was like). He was surrendered, probably because he had lice, along with a cage mate. The pet shop refused to give me the other pig "because it's hair was falling" out and they thought it was sick. I never heard anything else about it. Anyway, I had Peek for about 5 years before I started noticing any changes. Weight loss was the first thing and then he was diagnosed with renal failure. He managed to continue in reasonably good health for months more before the vet wanted to start him on sub-q. With my shaking hands it only took him 2 days to start crying when I "made the tent", so I began to syringe feed him Pedialyte. He loved the stuff and took a 20-30 cc 3 times (or more) a day for a couple of months. I think he was about 7 when he passed.

So, other than weight loss, I don't know what to expect for Fuzz. It's about time for another checkup with the vet. I'll ask her what the future holds for my little girl.
Top

Have you considered hyperthyroidism?
http://www.guinealynx.info/records/viewtopic.php?f=23&t=151

Your guinea pigs are so cute!
Top

The vet ruled it out several months ago, but I think that was because of the "rarity" of the disease in guinea pigs. I've printed out those pages and will take them with me on our next visit.
Top

Fuzzbutt looks like our little Suzi. All 3 of them are very cute
Top

They're all so adorable!!! Fuzz's cotton ball butt is too precious!
Top

Your piggies are adorable(starts swimming to the USA). I know what you mean about losing weight! Our Joy was over 1200grams back in January of this year and is now hovering around 780-830grams. We are syringe feeding her every 4 hours and she is eating 85-95% of her food. As usual the dumb vets know nothing! I envy you and your knowledgeable vets. Have noticed when she eats by herself or after a syringe feed her tummy is rock hard! Both Jan and Joy will be 6 on December 24th.
Sorry for hijacking thread! Hoping sweet little Fuzzy gets better real soon! All you can do is try to maintain weight! I will close now and start swimming, maybe the girls can pull me along?
Really cute all of them and glad Dusty and Belle have settled in well and little Fuzzy enjoys their company! Lovely photos.
Top

I didn't realize how long it's been, but I lost Fuzz a year ago. All 5 of my original adoptees(?) are now gone. (sob)

My current 3 are Dusty, Belle, and Charli. Dusty & Belle are a little over a year old, and Charli is only about 4 months old. I could have ages of Dusty and Belle completely wrong since I can't track time anymore.

I'll try to get pics, but I have to chase everyone down (I don't give them the attention they deserve) I've been feeling so icky myself that the Mr. has been doing most of the feeding and cage care. It's not fair to him. In fact, we think he's allergic to the hay, guinea pigs, or cats because he sneezes constantly.

Anyway, I'll get pics up ASAP. And write a bit more about Charli.
Top

Welcome back stranger! We have all been worried about you. Hoping you feel better soon. Not sure but I think you can get injections or tablets for allergies. A lady we knew was allergic to bees and she use to get injections for 2 years until her immune system built up against them! Big hugs to you all!

Hugs about little Fuzzy. It hurts so much, something I know I never get over! Depression is also an ugly friend and one hard to get rid off!
Top

So glad to hear from you! Hope you feel better soon!

A friend with severe allergies was helped by using hay cubes instead of hay. I have a pig who only eats green oats, he gets hay, he never touches it. Green oats don't make me sneeze at all, like hay does.
Top

Welcome back! I'm not reading your post that you're the one with the allergies, but whatever the problem, I hope you feel better soon!
Top

So glad to see you! When people disappear from the internet, we worry! And you are our resident Bio-Sponge expert! Okay, so that's not what you want to be known as. Occasional pop-ins are to be encouraged so we know you are still okay!

I hope the allergy problem gets resolved. Your guy (husband) is a wonderful man. I am sure he brings joy into your life (when he's not pretending to have a "guinea pig sandwich").

I am very sorry to hear about your guinea pig losses and that you are feeling "icky". So many of us take our good health for granted (or even our "mostly" good health). We are all getting older and with it come more issues.

I hope you can stop by again, even if it is not for long.
Top

She's back! So good to hear from you! I'm sorry for the pigs you've lost (always so hard) and happy for the new little ones. Looking forward to pictures.
Top

Good to see you back GrannyJu1. Your lengthy absence was causing a little concern. I hope all is going well.
Top

Welcome back GrannyJu. You were here when I first found this forum and were always sharing good info and cute pictures.
Top

Hoping you do not have a bout with COVID19!
Top
Post Reply 179 posts