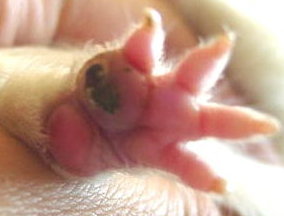 Ulcerative pododermatitis, also known as bumblefoot, is an extremely painful infection of the footpad. The footpad is swollen and may be crusted and/or bleeding. In severe cases, the guinea pig may be reluctant to move, depressed, and anorexic. If the bone becomes infected, the leg may need to be surgically removed. NOTES

Cause: Pododermatitis is often attributed to abrasions caused by wire floors or rough bedding which allow infections (typically Staphylococcus aureus, a common environmental bacteria) to become established. Poor sanitation, wet bedding, lack of activity and obesity may be factors. Prevention focuses on avoiding these causes. NOTES

It has been suggested by one pet owner that guinea pigs with heart problems (and perhaps poorer circulation) may be prone to pododermatitis. Adequate exercise and treatment of heart problems may help these pigs.

Guinea pigs are one of many animals that can suffer from this disease. In chickens, wet bedding is often blamed; in captive raptors, lack of activity and standing on a perch; rats and rabbits can also develop bumblefoot.

Treatment: Pododermatitis can be difficult to cure. The advice and experience of several pet owners appears on this page in hopes that one treatment will work for you. Examine your pet regularly to catch problems early. A vet can aid diagnosis and treatment.

Treatment is often lengthy and some pigs will need to be on baytril for at least a month (10mgs/kg/day). Josephine will soak with a diluted solution of chlorhexidine, drying the foot and applying BNP twice daily, continuing the soaks until the ulcerations are gone, but continuing the ointment to help moisturize and supply topical antibiotics. She wraps the feet when they are ulcerated but discontinues once they are healed to the point of no scabs/open sores. She suggests bedding on towels and unabrasive bedding, changing the bedding daily when the pigs are out of their bandages. (additional post on bumblefoot)

[By email] Susan H's vet recommended Baytril and soaking her guinea pig Chloe's foot twice a day with a chlorhexidine solution. Susan felt the swelling was not going down enough and seemed to be moving slightly up the leg. After a followup visit, her vet advised continuing treatment and said without some improvement, the foot might need amputation.

She found a recommendation online to use Epsom salts to soak the infected foot and mixed 1/2 cup of warm water with 1/8 teaspoon of Epsom salts to soak Chloe's foot two to three times a day, making sure that the skin did not get too dry. Within a few days the swelling of the foot began to subside and the swelling of the leg disappeared. The vet was surprised at the improvement and advised continuing the treatment and returning in two weeks. At that time the foot was almost back to normal size and she was walking on it without any discomfort. This treatment worked very well for Chloe. Using a cap or small pill container that can comfortably fit the foot can be helpful.

One guinea pig groomed itself while having its feet soaked and the epsom salt solution severely injured the eye! Do not leave your guinea pig unattended while soaking with epsom salts! This poster subsequently applied a protective eye cream (see vet) before soaking to help prevent future injury.

Zoe's treatment for a guinea pig with severe bumblefoot (swollen to the size of a grape with an open sore) is:

After soaking, she lets the foot dry while holding her so it stays clean, then cuts a patch of the dressing to cover the sore. It adheres well, lets the wound drain and it doesn't hurt when removed.

V.C.G. Richardson described a reportedly successful treatment -- injecting antibiotics directly into the affected foot pad (0.2ml [20 mg] lincomycin daily for 5-7 days), an approach which may be useful for a pig with poor circulation. NOTE: lincomycin appears on the dangerous drug list and may cause complications if used.

Cement antibiotic beads have been embedded in the afflicted tissue in raptors. This technique puts the antibiotic where it is needed rather than relying on distribution of the antibiotic through the blood supply when circulation may be poor. In addition, drugs not normally used due to their potentially toxic side effects but effective against the identified bacteria, may reportedly be safely administered in this local form.

Pinta describes her treatment of bumblefoot. She is observant of her pigs and may be catching them in the earlier stages before the infection is full blown and much more difficult to treat:

In rabbits, Harkness and Wagner recommend cleaning the foot, trimming the nails and applying a topical antiseptic or protective cover. They note, " Frequently, treatment is prolonged and complicated by secondary bacterial infection." They discuss several methods of treatment, such as bandages or a light protective dressing combined with an antibiotic ointment, systemic antibiotics and application a soothing ointment.

Be sure to read also an article by Dr. Nakamura on pododermatitis in guinea pigs.

Regarding severity of pododermatitis

Dorcas O. Schaeffer, DVM notes that "Infection can extend deep into the tissues of the feet, traveling up tendons and into bone, resulting in osteomyelitis."

V.C.G. Richardson claims it may also progress to amyloidosis of the liver, spleen, kidneys and adrenal glands.

Ralph M. Bunte, DVM notes that, "Amyloidosis has been temporally associated with advanced cases. Isolated cases of pneumonia, mastitis and conjunctivitis have been seen."

Regarding causes of pododermatitis

Harkness and Wagner suggest using a clean soft bedding, providing adequate nutrition and exercise and avoiding obesity. They conjecture that a warm, moist environment may result in thinner fur and a less dense footpad.