A Pet for my Daughter

After the death of my daughter's hamster in the summer of 1999, we began the search for another pet -- one that would live longer than the short two years of a typical hamster. Guinea pigs, with their average life spans of 5-7 years, seemed perfect. A week later we found ourselves in a local pet store holding a small docile smooth jet black guinea pig. Ebony came home with us, along with hay, pellets, bowls, and other items we purchased to take care of her needs.

She hid in the roomy cage. We tempted her with fresh vegetables. She seemed shy. The next morning when I noticed her eyes were crusty, I called the pet store. The employee said the crusty eyes were nothing to worry about, that many guinea pigs had crusty eyes and recommended simply wiping them clean.

The next day when it seemed she was eating very little, we called the pet store again, worried about her lack of appetite. We had also discovered that she was covered with lice. They recommended purchasing an oily concentrated dog and cat vitamin supplement in a tube to feed her. To get rid of the lice, the employee gave us some insecticidal powder to dust on the guinea pig. But Ebony was still not eating. The pet store employee told us we could bring her back and emphasized that they would not pay for any veterinary care. But how could we abandon our little pig? She was already a part of the family, not a defective product to be returned to a store.

Realizing the advice I was getting from this employee was not helping, we took her to a vet, who prescribed antibiotics, recommended hand feeding, and diagnosed Ebony with pneumonia. He said she had been ill before we brought her home and that it was likely other guinea pigs in the store were also ill.

But it was too late. Valuable time had been lost, poor advice taken. We were heart broken. Instead of having a wonderful new pet to soften the loss of my 10 year old daughter's hamster, our beautiful new guinea pig, Ebony, was dead. More tears, more heart ache. I felt I had failed.

I got on the internet and learned a great deal from people who'd had guinea pigs for many years. And I learned how deadly was the advice I had been given by the pet store employee. Advice that cost Ebony her life.

My daughter and I decided to share the care of two guinea pigs we purchased from a small breeder in northern Virginia. They were sturdy "pet quality" juvenile pigs and we named them Nina and Snowflake. Meanwhile I spent more time on the internet learning about these gentle animals. I saw others with sick pets, desperate for help. I decided to organize advice that was posted over and over so that it was more quickly and easily accessible. I wanted these pet owners to know how important prompt medical care is to the health of their pets and to recognize the signs of illness. I wanted them to understand the risks of purchasing pet store guinea pigs and the risks of breeding. And I saw how many guinea pigs were discarded at shelters and rescues; guinea pigs that desperately needed homes.

And what of the pet store employee? Well, she's the owner of the store now. To date, nothing much has changed. No care information accompanies a guinea pig's sale and no veterinary care is provided an ill pet. The same 7 day "replacement" warrantee will allow you to exchange your defective merchandise.

Don't make the mistake of purchasing a guinea pig from a pet store.

Save a life and ADOPT! 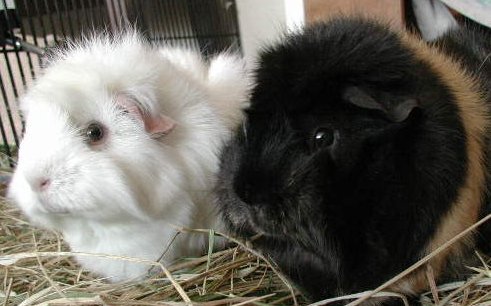