The Legend of Barry Jenkins

Always add a descriptor so you know if it is mg or ml (aka cc) you are referring to. Dosing is very complicated for some people so I don't want anyone to jump to conclusions.

What was the concentration of the ivermectin in mg/ml again?
Top

And that's what he got. I am going to keep monitoring his itching and give him another dose on Saturday, as it will have been 7 days. He seems to be doing better. We were looking at his thin spot during his floor time and it looks like it's getting smaller. Less itching too. That upcoming dose may well be the last one he needs. I gave him some celery and he loved it. Of course I took the stringy out and broke it up to make sure any I missed was small enough to avoid him choking on it.
Top

BJ saw the vet today and all went well. He has one more Ivermectin topical treatment to go and he's done with that. He'll get it on Saturday. His itching is very minor now and only on his thin spot. The vet noticed that it has gotten smaller and his hair is growing back. She also was impressed with how good his grease gland looks.

That brings me to something I should clarify about his antibiotics. The vet prescribed them for his grease gland, which did look infected, not for mites or anything to do with the itching. I was a little out of sorts the last time I saw the vet because of having to watch BJ suffering and I misunderstood what it was for. I'm just glad he's ok now and back to being happy.

He has gained a small amount of weight from 1.52 kg to 1.57 kg. He's a very large pig, not just in weight, but in length and height. Sammy and Mr Bubbles are both pretty good sized boars and BJ makes them look small by comparison. They couldn't feel any noticeable tumors or anything else on his body to warrant an x-ray. Nothing to indicate that his weight is anything abnormal. He's just a big boy. Let the legend of Barry Jenkins continue!
Top

YAY! So glad to hear! Well done to you both. BJ ask your slave for a kiss, cuddle and treat from me and the girls! Great going!
Top

He got an apple slice as a treat. I'm so glad he's well. He really had me worried.
Top

He's even started coming up to the front of his cage to greet me again. Still a little apprehensive about letting me pick him up, but at least he doesn't run from me as soon as I go up to him.
Top

So glad to hear things are improving for him!
Top 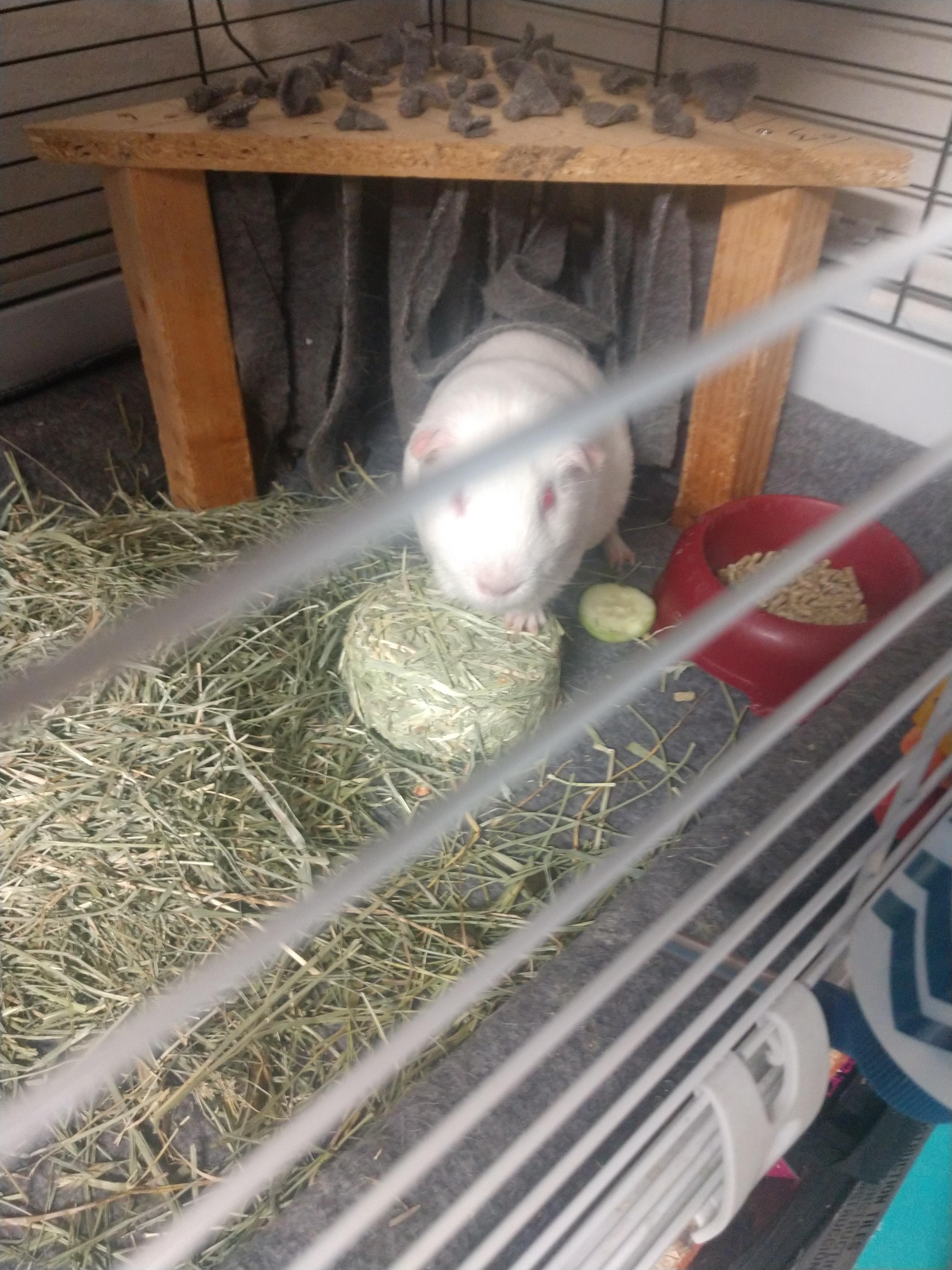 Went to the feed store to get the guinea pig supplies today. In addition to the bale of hay, pellets and bedding pellets I got my boys the oxbow hay stacks with carrots in them. They've been out of them for several months. Turns out the big guy likes it. So nice to see him get excited about something again! The picture doesn't show it, but he actually popcorned and did a happy squeak before standing on it and eating off of it.
Top

So glad he is happy again! Shame things like that aren't available here! Enjoy yourself BJ!
Top

I ordered extra hay from Chewy so I have enough for a couple months. Then I cut up one of the boxes and built a maze for Lacey.

Cute video and neat maze! Where did you find the little pink step stool, ItsaZoo?

BJ likes to run around on the floor. It's quite a sight to see him popcorn because of his considerable size. Since he's been itchy so much, I didn't realize how much he was missing by not feeling well enough to do anything else but sit there grinding his teeth. Now that he's better, I just love seeing him happy and wanting to play. This has inspired me to get to work on the guinea pig playground I've been putting off making.
Top

Oh, I love that, ItsaZoo! Can I try to figure out a way to link to it from some useful topic? Maybe in the records forum? I notice there are issues with high loads that are affecting access to it right now :-(
Top

How much does "the big guy" weigh? He does look a bit chunky. :P

ItsaZoo - what fun - so many doors to go through!
Top

BJ was 1.56 kg (3.4 lbs) at his last checkup. That's a little bit high, but not critical given his size. We need to get him down closer to 3 lbs. Shouldn't be a problem now that he's well and moving around more.
Top

BJ is still getting along famously. It never ceases to amaze me how these scared little ones come around with a little love and attention. That and getting them healthy. The mites are long gone and he hasn't been itchy in quite some time now. His bare spot has filled in nicely and isn't noticeable unless you look very closely for it. I can actually touch it without him going bananas now.

He still doesn't eat the lettuce, so I don't offer it every day anymore. Every few days I try giving him some and he nibbles a couple of bites off of it. He eats most of the cucumber, parsley, carrot and cilantro. I rotate those around for him so he doesn't get too much of any one veggie. His hay intake is still pretty substantial and he eats all of the 8th cup of pellets I give him daily.

As for vitamin c, I have been putting it in his water and he's drinking it all every day. His curiosity is always peaked when I walk in and it's satisfied with a hand sniff, sometimes followed by a nibble. He's gotten a lot better about letting me pick him up. He does squirm a little bit and sometimes he'll bite my arm. It's not a hard bite. It's just enough to let me know he wants to be put back down or be repositioned.

I'm so glad that he's happy now. He's come a long way since I brought him home. He does very well outside too when it's nice enough for me to take him out there. I still can't get over his size! He's the biggest guinea pig I've ever seen; at least in person.
Top
Post Reply 260 posts