One thing I remember about the fleece is trying to shake it off outside.

Showered myself with pee.
Top

I'm just learning the ins and outs of fleece bedding. I didn't know about putting a towel under it, but I do know about not shaking it. I learned that from using holding towels. They soak up the urine and you have to shake it gently to get the droppings out without splashing urine on yourself. The other difference between the shredded paper bedding and the fleece is that you have to change the whole fleece daily, while the paper bedding lasts up to 3 days with just scooping the soiled bedding in between cage cleanings.

The reason I choose fleece for Sam and Dean is because of the size of their cage. It would take a ton of paper bedding for them if I went that route. As it is with my older pigs, I go through 4-5 of the large packages of bedding every month. It would take double that amount if I use it for all of them.
Top

If you're going to put fleece down, by far the cheapest, most absorbent, most odor-controlling substance to put under it is wood pellets. Two sacks of horse stall bedding will (about $8 a bag) will last you a year.
Top

Still working with Sammy on being calm when I'm holding him. Turns out the way to his heart is through his stomach. He trusts me or he wouldn't let me pick him up, but he still acts squirrelly. A little grass to munch on keeps him happy so I can pet him while he sits with me. 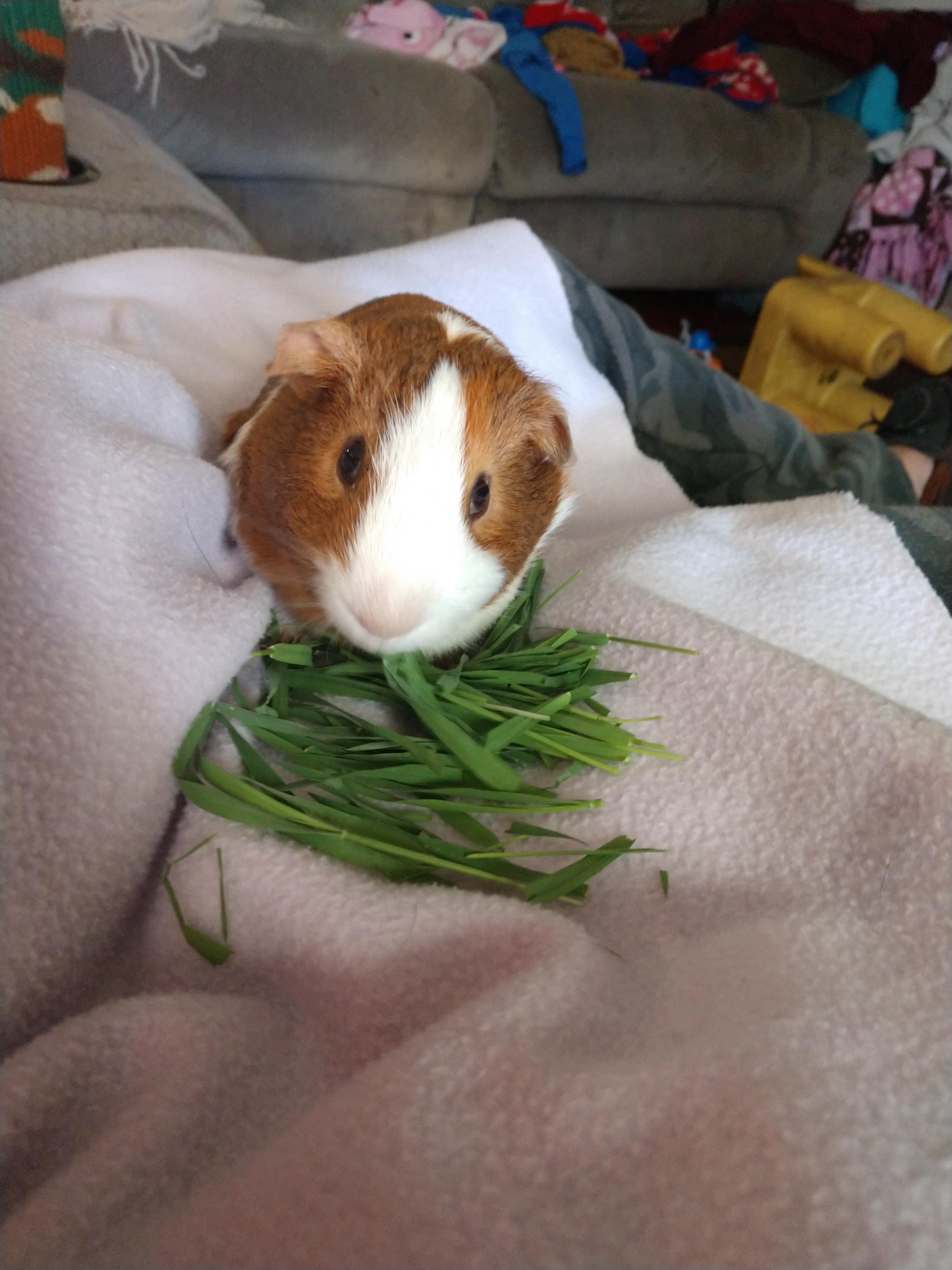 He has such a sweet little face!
Top

He is such a character! I just love him! He's got so many unique qualities about him. He has been a very pleasant addition to our home. His brother, Dean has been too. Dean is a little snuggle bug!
Top 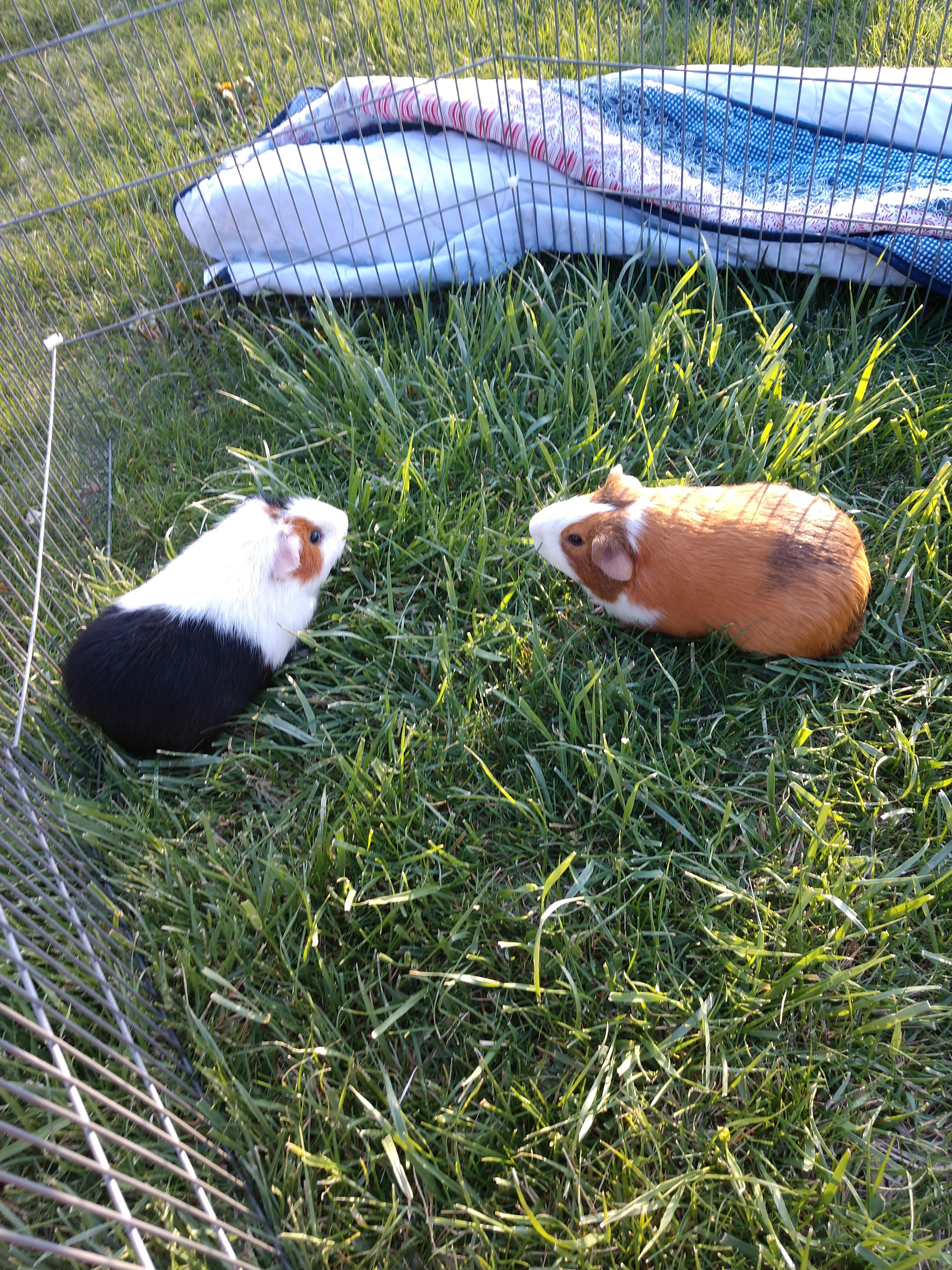 Sam and Dean are to the point where they are secure enough that they don't need overhead cover when they go outside. Enjoying some grass and the last rays of sunshine for the day.
Top

Don't forget to provide at least a corner of shade. When the sun is out, guinea pigs can become over heated, even if the temps seem okay.
Top

I know. The sun had almost set at that point. What little sunshine there was left was being broken up by the trees so they weren't being directly exposed enough to get overheated. The temperature had dropped down to about 70. If you look at the latest pictures on my Mr Bubbles and Scruffy thread, those pictures were taken half an hour before Sammy and Dean's and they have a thick blanket providing protection from the sun.

I never take my babies outside in the heat of the day. I also give them overhead cover while the sun shines on them unabated. I know folks who have lost piggies to the heat even though they had shade. Mine only go out when the temperature is between 65 and 75 as recommended by the humane society. Even in that range, you can never be too careful.
Top

I do think when people are outside with their guinea pigs, they will know right away if there is a sun problem (if they seek shade, they need to provide it for their guinea pigs). I always post about this to bring it to the attention of other readers (not necessarily the author of the topic).

Yes, at that time of day the sun is not an issue.
Top

So Sammy and Dean had their initial exam today and it went mostly well. Both are healthy, but there is an issue with their ears. No infection, but a lot of wax. The vet had to clean quite a bit out before she could look into their ear canals because she couldn't see past the build up. She believes it was caused by their previous environment. She gave their ears a thorough cleaning and they looked good. I'm supposed to keep an eye on them and bring them back if there are any further issues.

Sammy weighed in at 2.42 pounds, which is right at the top of his optimal weight range. Just have to be careful not to over feed him. His urine was milky white when I first got him, but it's mostly cleared up now. This we know because he let loose all over the place while his nails were being trimmed. He squealed like he was being tortured during the whole process. He just didn't like being poked and prodded. Everything is good with him and he's a healthy young cavy. Just have to monitor his ears.

Dean weighs 2.16 pounds. Perfect! His urine is still milky white, but it's getting better. Just not as quickly as Sammy's. Continuing the proper diet I have him on should clear it up. The exam was stressful for him too which tells me that probably neither he nor Sammy were getting regular check ups. Everything else is good to go. Healthy young cavy. Just have to monitor his ears.

I'm relieved that these guys are healthy. They can eat their fill of grass and dandelion greens as long as it's not been sprayed with insecticides and weed killer. That's not a problem since I never use them.
Top

If their urine is milky, it is likely the dandelion greens (high in calcium) are partly to blame.
Top

They just started getting dandelion greens about a week and a half ago. I'm suspicious of the pellets they were getting at the humane society. There were two full bowls of pellets in the cage with them when I first saw them there. I've cut down their intake of pellets considerably as well as switching them to better ones. I wouldn't be surprised if they were getting rabbit pellets before I got them. They did tell me that there was nobody who knew much about guinea pigs to care for them. They did the best they could, but I don't think these guys were being fed a proper diet. The fact that both of their urine was milky and both are clearing up (just not at the same rate) tells me that is most likely the case. They are in good hands now:)
Top

Ideally, adult guinea pigs (over the age of 6 months) should have pellets cut back to roughly 1/8 a cup per pig per day.
Top

I read that somewhere too. Sammy and Dean are about 10 months old. The vet says that 2 tablespoons per day is good for my two year olds, but they don't eat that much. Sammy and Dean do easily. I'm not exactly sure how much is too much for them, but I'm reasonably sure that two full bowls left for them to have at is way too many. I give them a handful which is around a quarter cup and it lasts them the day.
Top 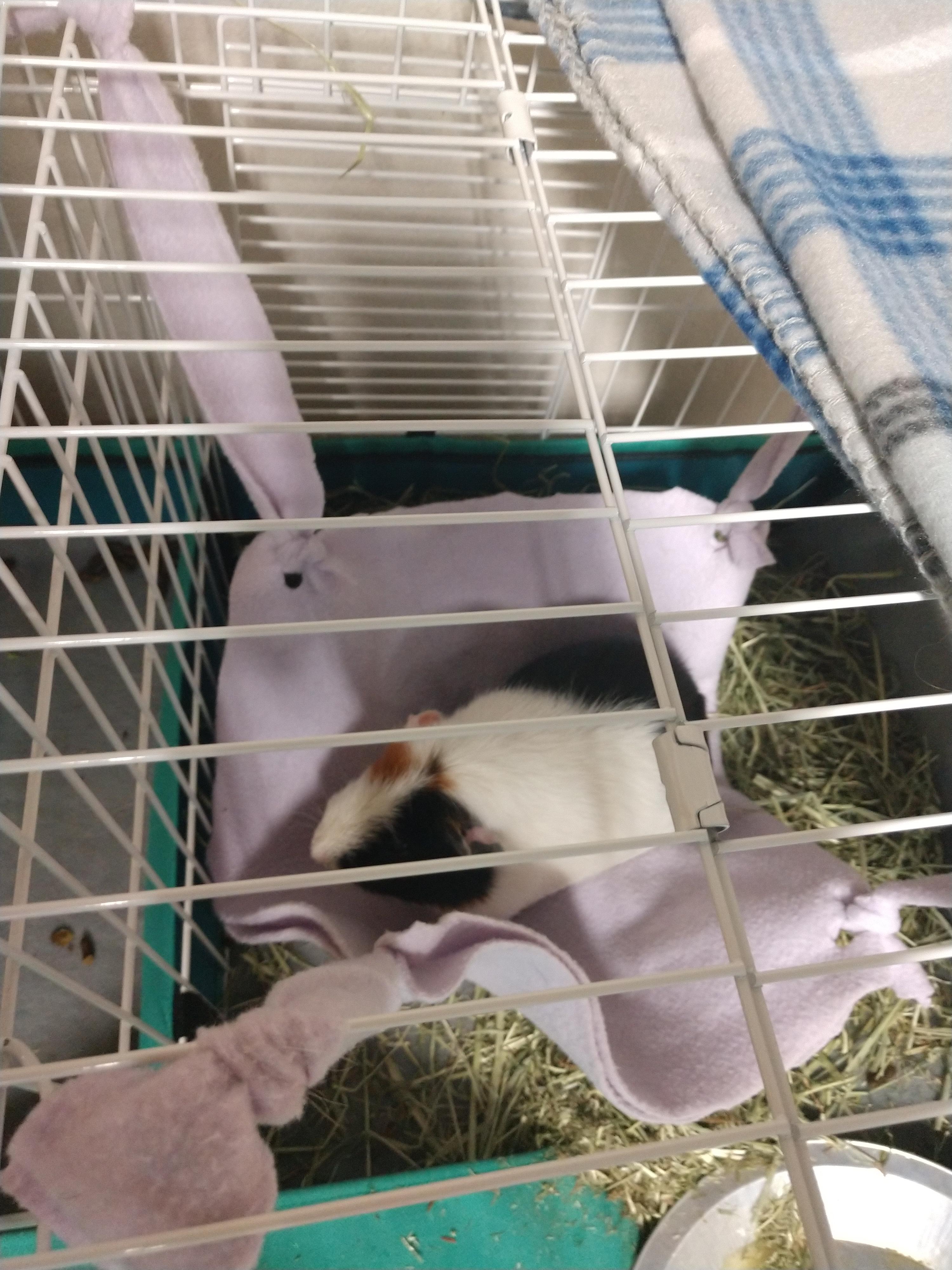 I got this idea to make my own guinea pig hammock to see if Sammy or Dean would be interested in laying in it just because guinea pigs in hammocks are adorable. My money was on Sammy to be the first to get in it, but all he wanted to do is sniff it, nibble on it and get under it and hide. Dean, on the other hand got right in it. Guess I don't know them as well as I thought! I might have to make more of these for Scruffy and Mr Bubbles.
Top

Dean finally got out of the hammock and Sammy jumped in it. I have a picture of it, but imgur doesn't seem to be working. I posted it, but it's not coming through for some reason. It has to be washed now so neither of them can use it ;) Wonder who's going to win the race to get in it after it's all clean.
Top 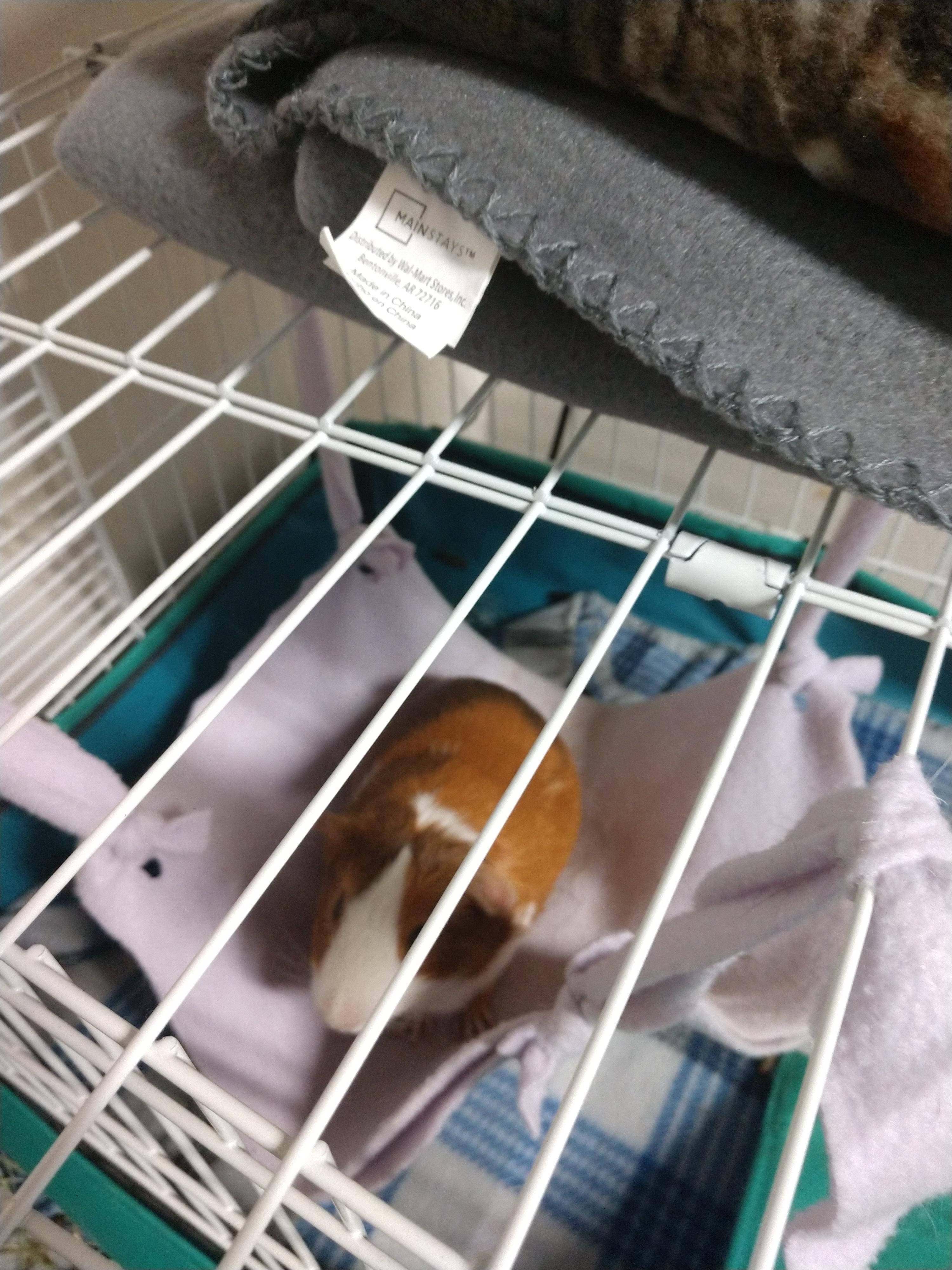 Sammy got a turn in the hammock.
Top

Sammy is almost a double of my Scatter, of whom I've been dreaming about the last few nights. I miss his so much. He was a crazy but loving pig.
Top
Post Reply 180 posts