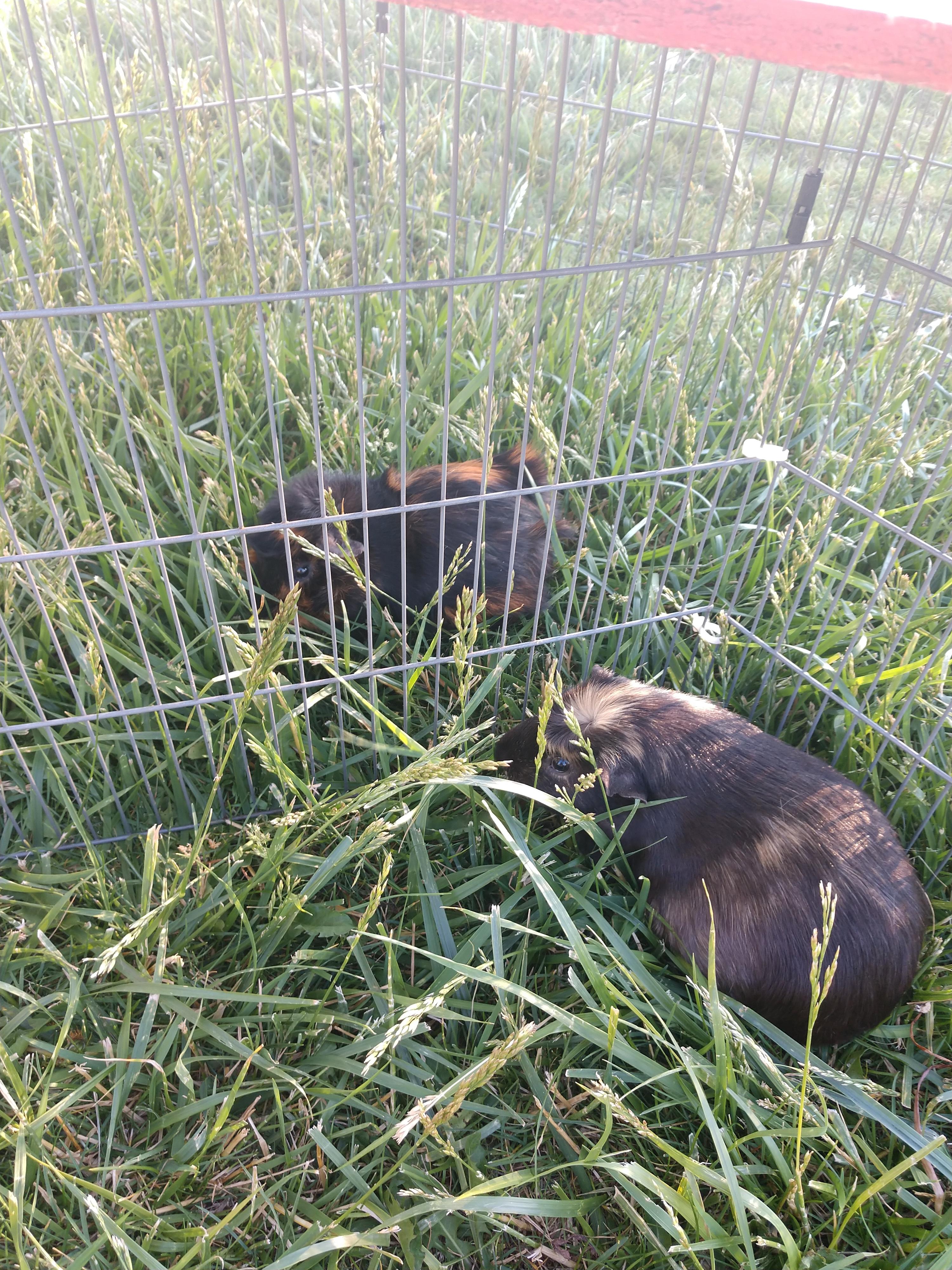 Grazing along side of his big brother, Mr. Bubbles. Even though they couldn't be housed together, he still loved his brother and they always grazed outside together. 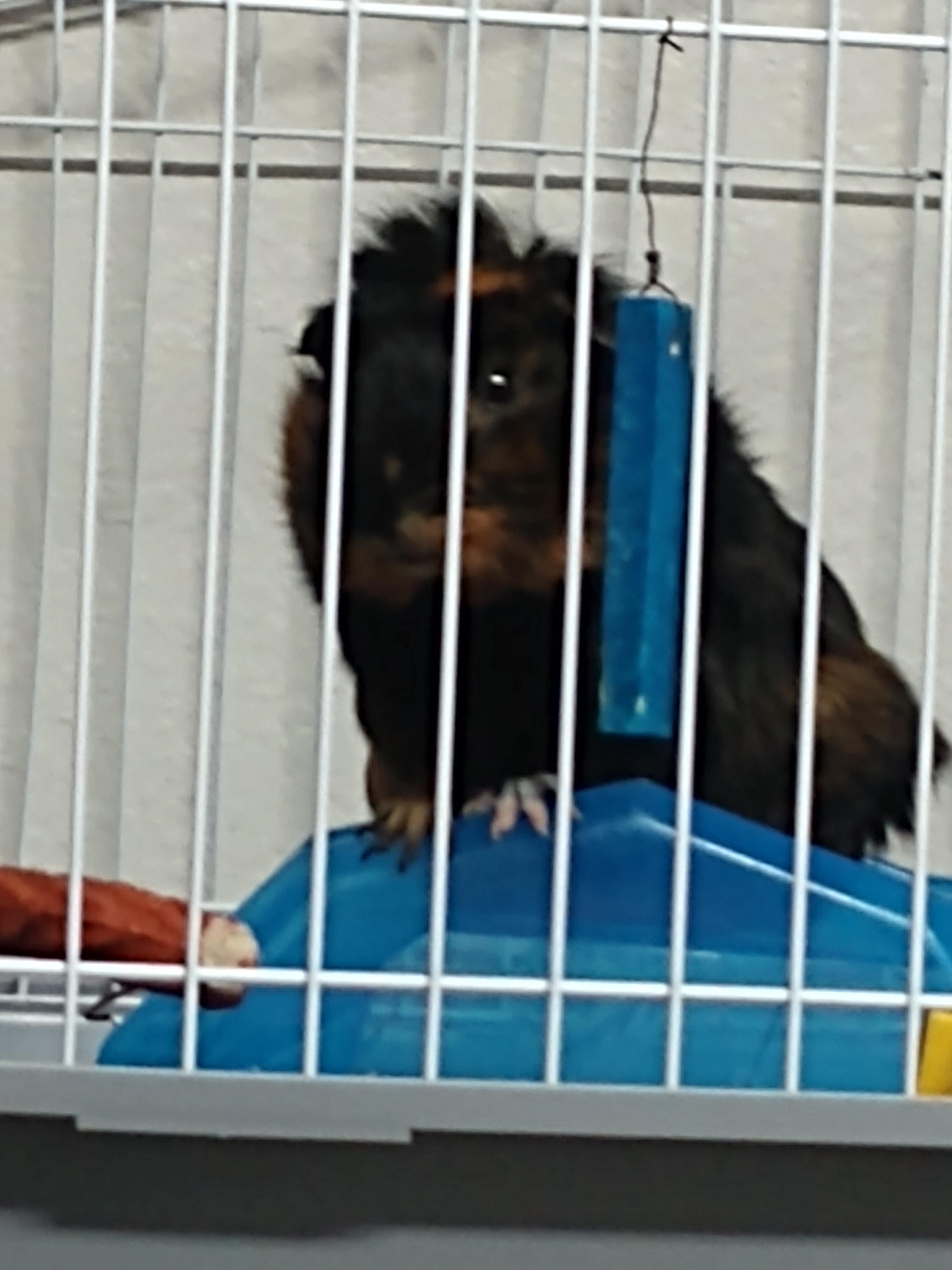 Scruffy perched on his house. He spent most of his time up there surveying the room. He always liked to see what was happening. When he got his new cage with the fleece forest, he used that house to get on top of it where the views were even better!
Top 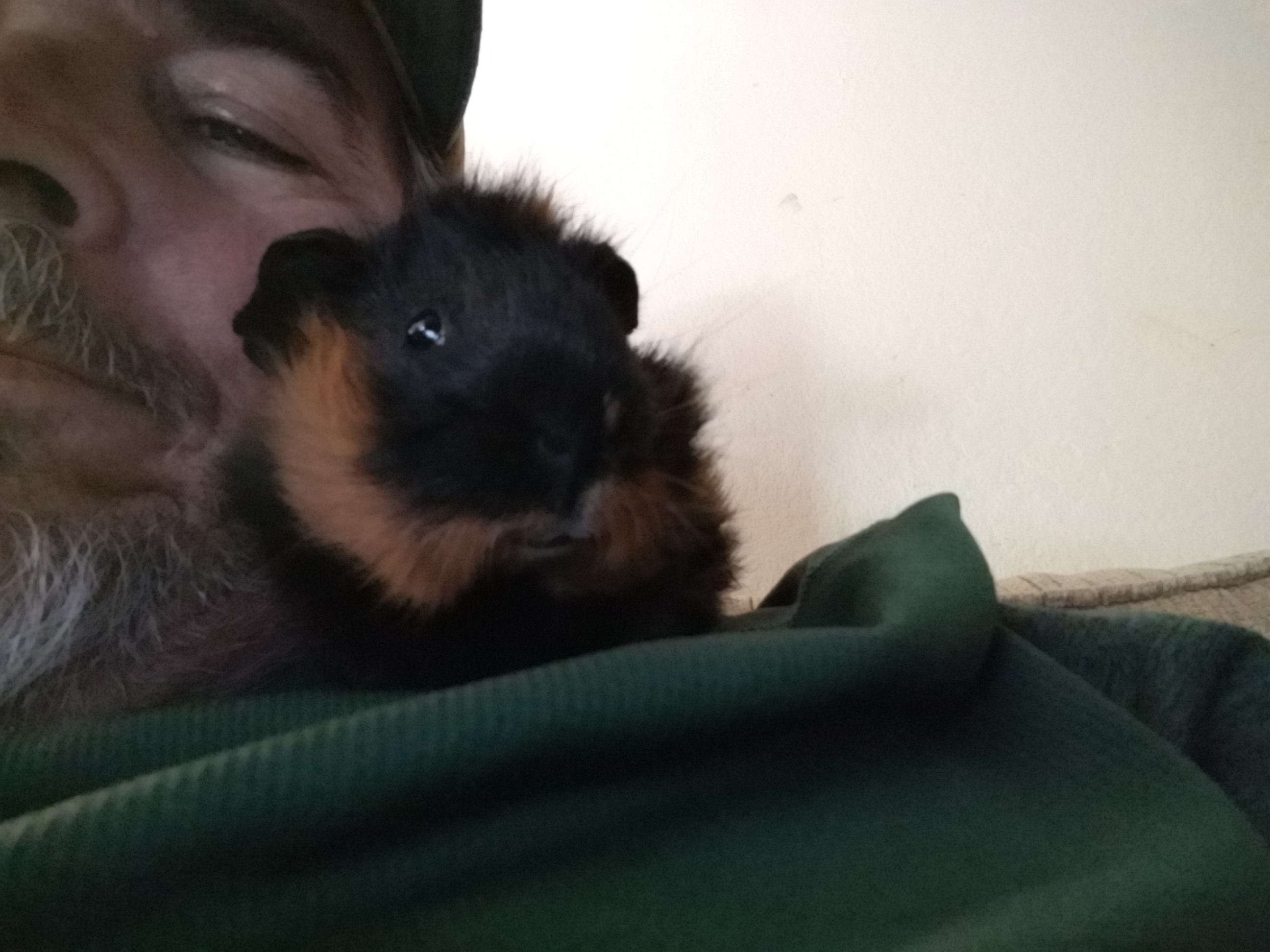 His favorite spot to sit during lap time. He used to lick my cheek and nibble my beard from up there. Something only he did. 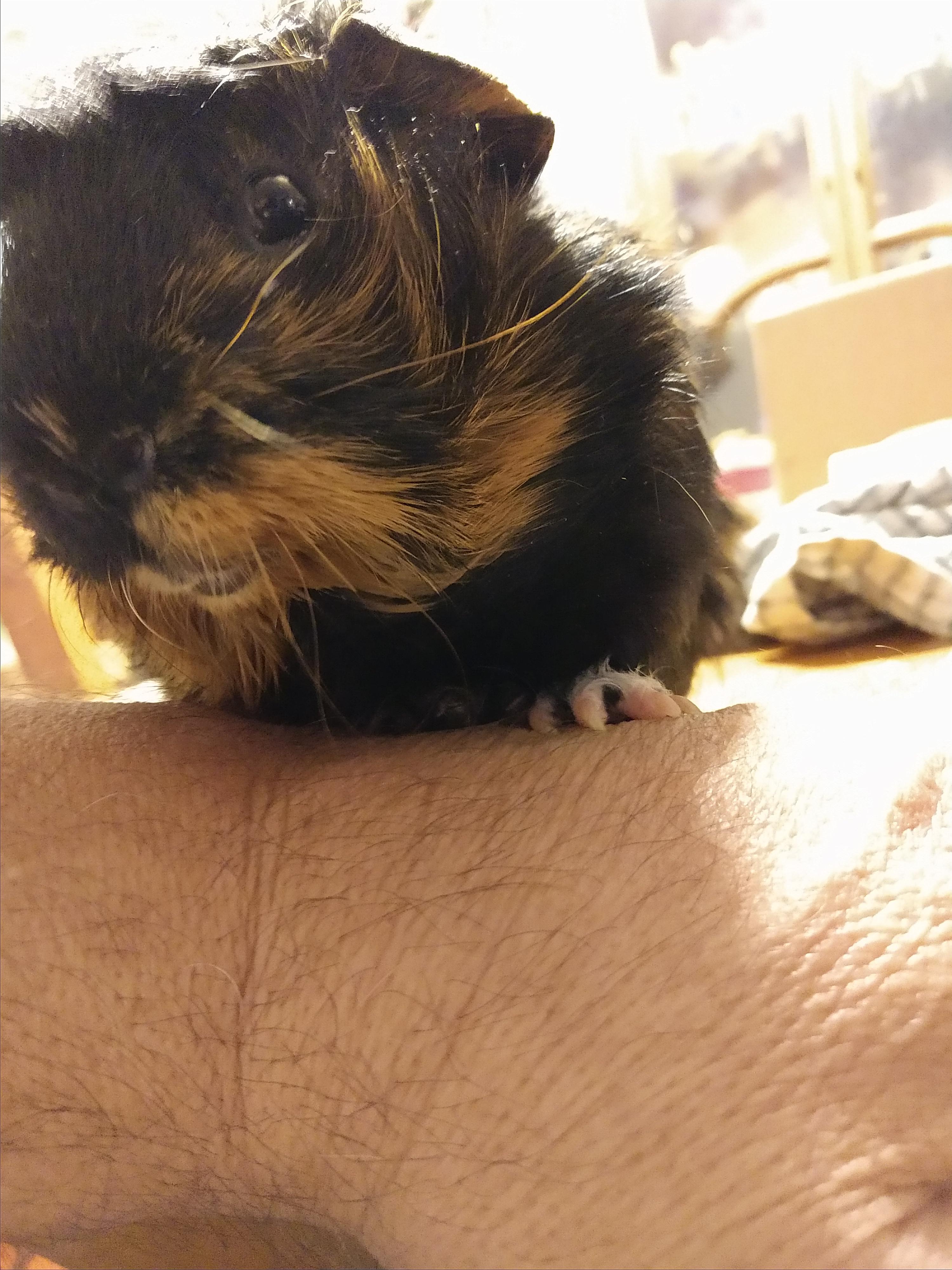 Scruffy during his recovery from the bowel infection which nearly took his life last year. Even during that tough ordeal, he never lost his spunk. His eating habits were never fully the same after that. Even through all of his health problems, he was still a happy, bubbly little guy.
Top 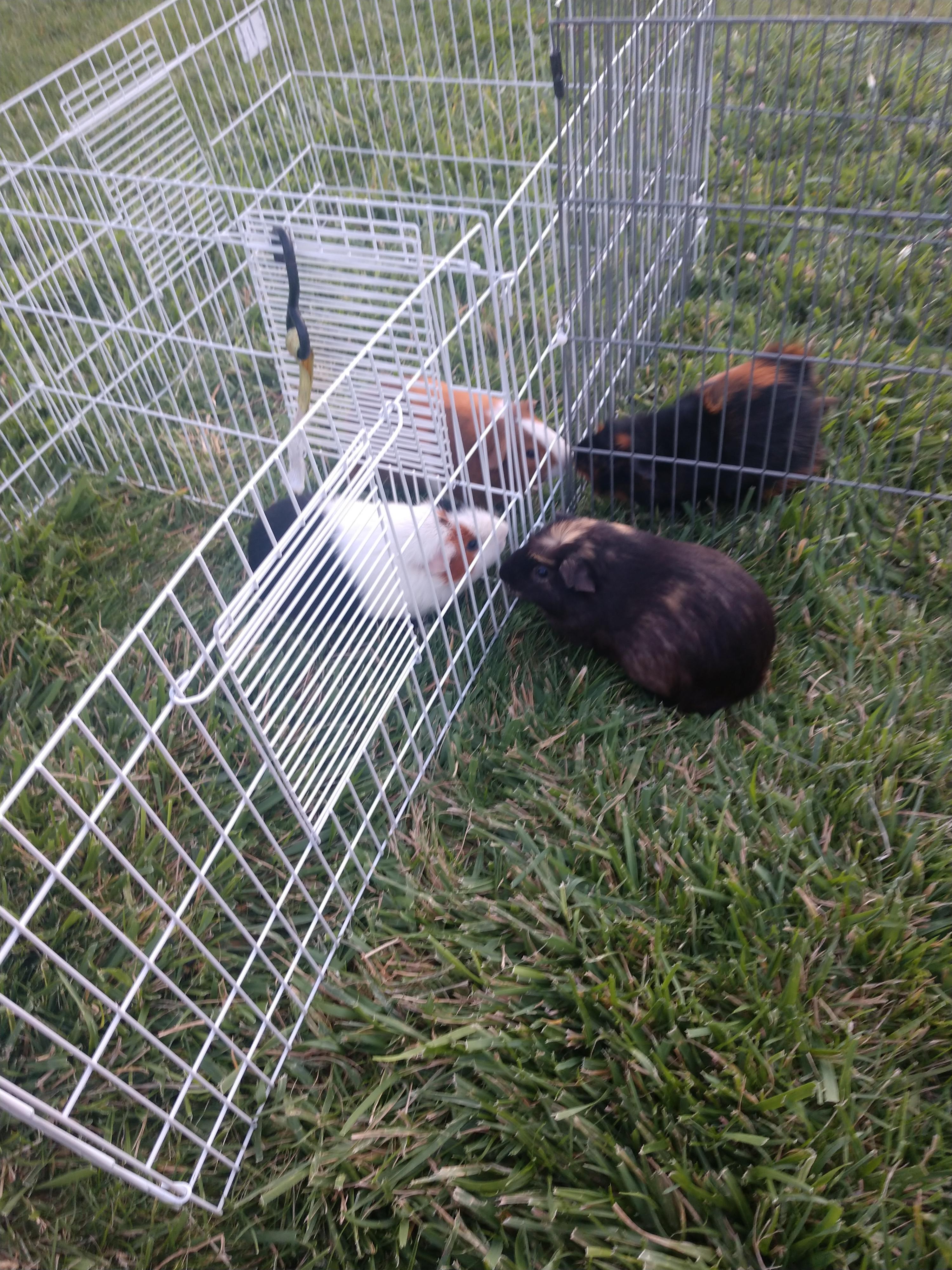 With the addition of Sammy and Dean to our family came the 4 musketeers. Scruffy loved his downstairs neighbors and he always squeaked when they did. 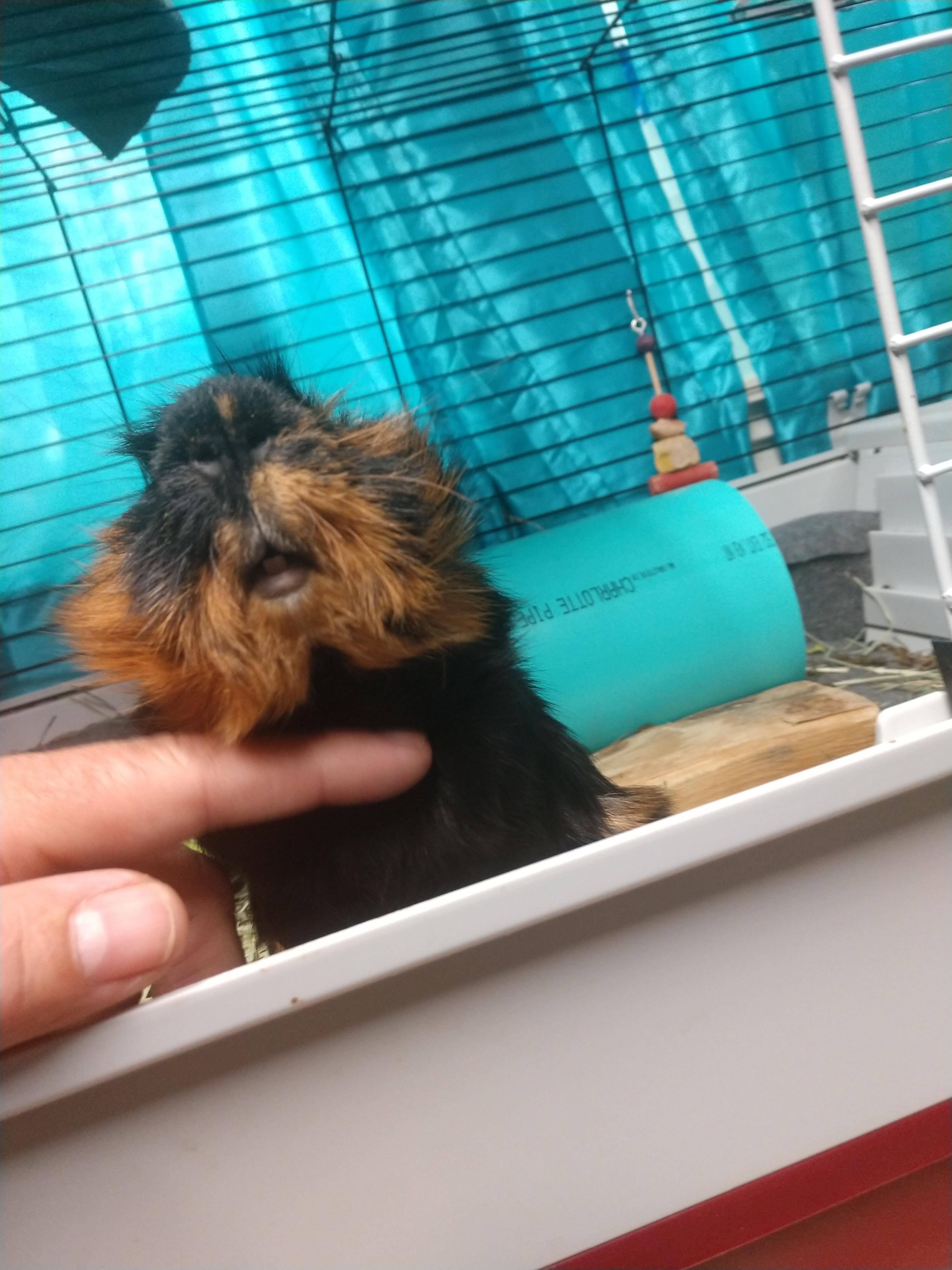 Scruffy loved having his chin rubbed. He never let me get away without rubbing his chin.

Farewell my sweet boy! I will miss you. Nothing can replace you or fill the hole in my heart. Your body gave out, but your spirit will live on forever.
Top

What a nice tribute to such a special guy. I’m so sorry for your loss. Scruffy had such a good life thanks to your good care.
Top

I feel very fortunate to have been his human. I'm grateful for the last year with him after his severe bowel infection. His health was never quite the same after that. He didn't suffer during the last year, but the vet said that an illness as serious as that could very well shorten his life even if he survived it. Back when he had that, she said that his chances of living through something that bad were 50/50 if he got through the first two days on the antibiotics. Getting him through that ordeal and getting to enjoy him and the unique nature of his character is a gift that I will always cherish.

Mr Bubbles has been a bit restless since it happened. I believe he knows that Scruffy is gone even though they couldn't share a cage. He enjoyed rubbing noses and swapping squeaks and purrs with Scruffy even though it had to be through the wire cages. He's getting extra love as are Sammy and Dean. Loving on Mr Bubbles and having him do his content squeak and purr helps ease some of the pain of losing Scruffy. I'm really going to need him over the next few days.
Top

Yes, there are little things, little behaviors that so endear these guys to us [edit]. While you were fortunate to have him in your life, he was doubly lucky to have you in his. I am so sorry for your loss.
Top

We have all enjoyed hearing their stories and seeing pics of their adventures. Scruffy was such a little character. Thank you for sharing him with us!
Top

I took Scruffy to the vet clinic to be cremated this morning. They take good care of him and I'll get his ashes back in about a week. The finality really hit hard watching them take him to the back in the box I had put him in. They provide a nice urn and everything.

Scruffy had this hanging chew toy that has been chewed down to a nub. I got him a new one just like it, but he still preferred the old one. He was even chewing on it Friday evening. I'm keeping that too as it was his favorite toy. I don't know exactly what the urn will look like, but I hope it has a way to put a photo of him on it. I have a photo album of him. Not sure if the link will work, but here it is:

Yes, it did work. Some great pictures of him! Scruffy was a charming guy.
Top

He was an adorable pig and I'm so sorry he's gone. Gp's really know how to grab your heart & it sounds like he was an extra special one.
Top 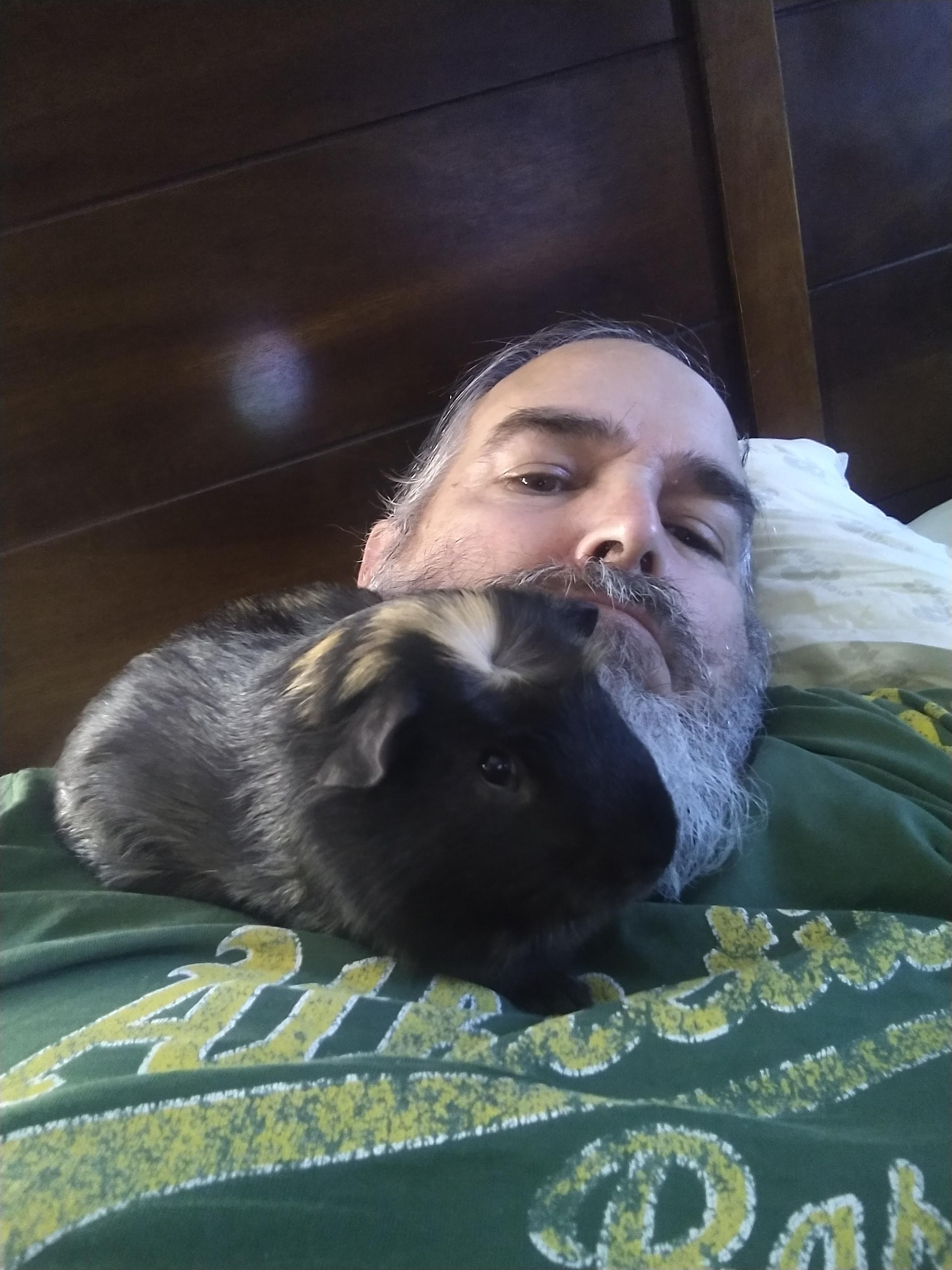 Thank goodness for Mr Bubbles. I'm really feeling Scruffy's loss more today than since he passed. Now I know why we're supposed to have at least 2 guinea pigs. It's not just for them. It's for us too. When we lose one of our friends, the others provide the comfort we need to move on. Dean spent over an hour with me last night. Sammy is more high strung and just likes to run around, but he had a good 15-20 minutes of lap time yesterday too. I am going to try and get him extra floor time this evening since he's not much of a lap piggie.
Top

Sorry for your loss Renonvsparky

I have same "holes in shirts" issue with our 4 the only problem is that Nala tends to get the skin underneath as well so I also end up with bite marks. |

Scruffy is the only one of my guinea pigs to pull on my shirt. I have plenty of shirts with his nibble holes in them to remember him by. In the picture above, Mr Bubbles is laying on the spot in that shirt where the holes are. Scruffy was so adept at getting my shirt that he only got the skin under it a couple of times. Mr Bubbles doesn't usually lay there on me. He's usually further down on my chest.

There's a few things that only Scruffy did. He's the only one who bit on my shirt and pulled up on it. He's the only one who sat like a dog or cat with his hips spread and his front feet together. Most guinea pigs don't sit like that. Up until he taught the other 3 guys to do it, he's the only one I ever had chew on the wires of his cage for attention. He's also the only piggie that stretched out, yawned and did this little quiver like thing while purring to show excitement when I picked him up.

I made this slide show of him and Mr Bubbles before I got Sammy and Dean. Hope the link works. Some of them are in the gallery I linked to and some are a bit fuzzy because they always manage to move just as I go to take the picture:
https://photos.app.goo.gl/uxPzFKT6qcWyKusL7
Top

Very nice. I wish I had more pictures of our guys. I used to take a lot of guinea pig photos at one time, but got out of the habit a few years ago.
Top 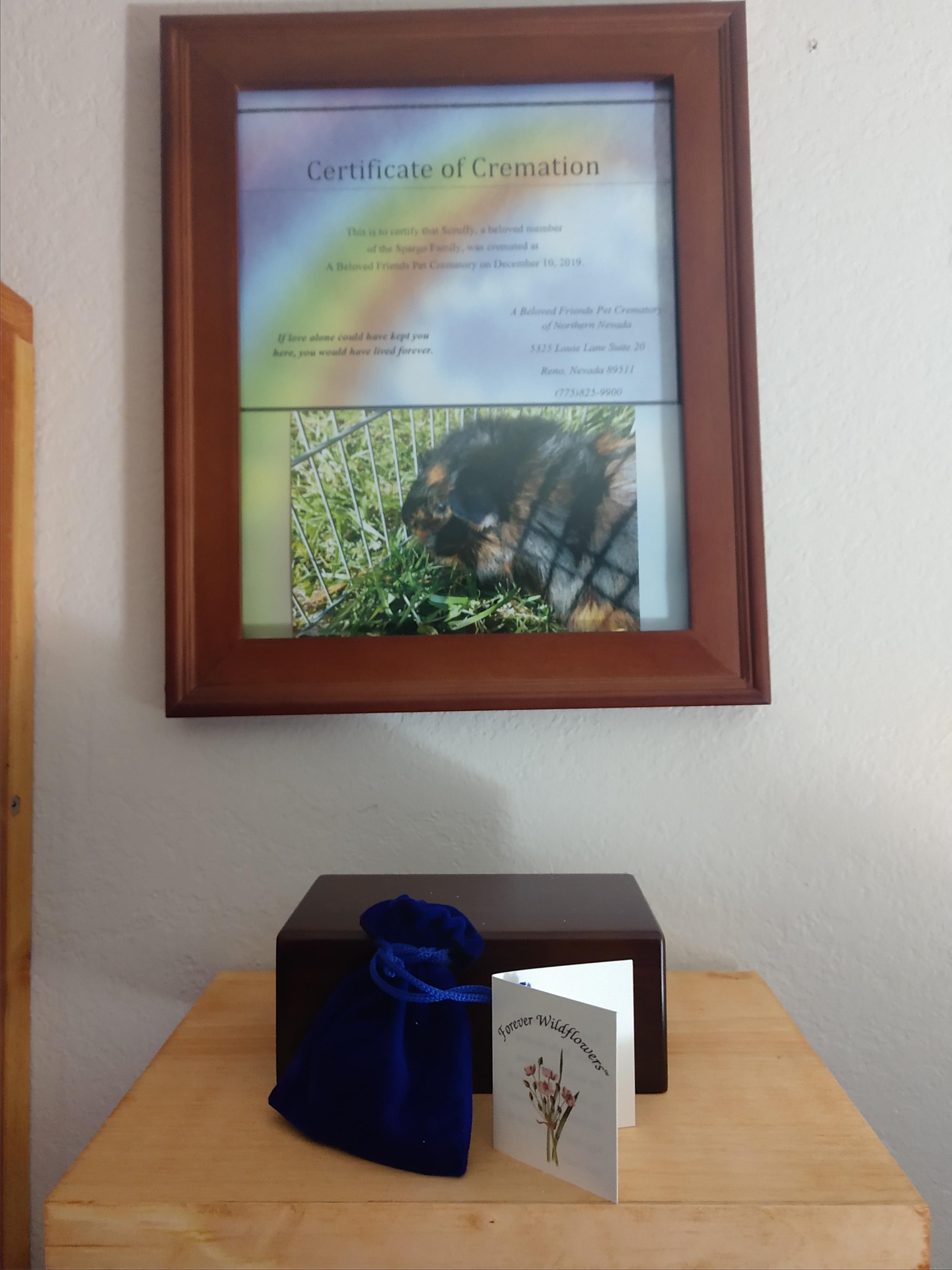 Just a few more days and I'll be with my little buddy again. Can't wait to see him. 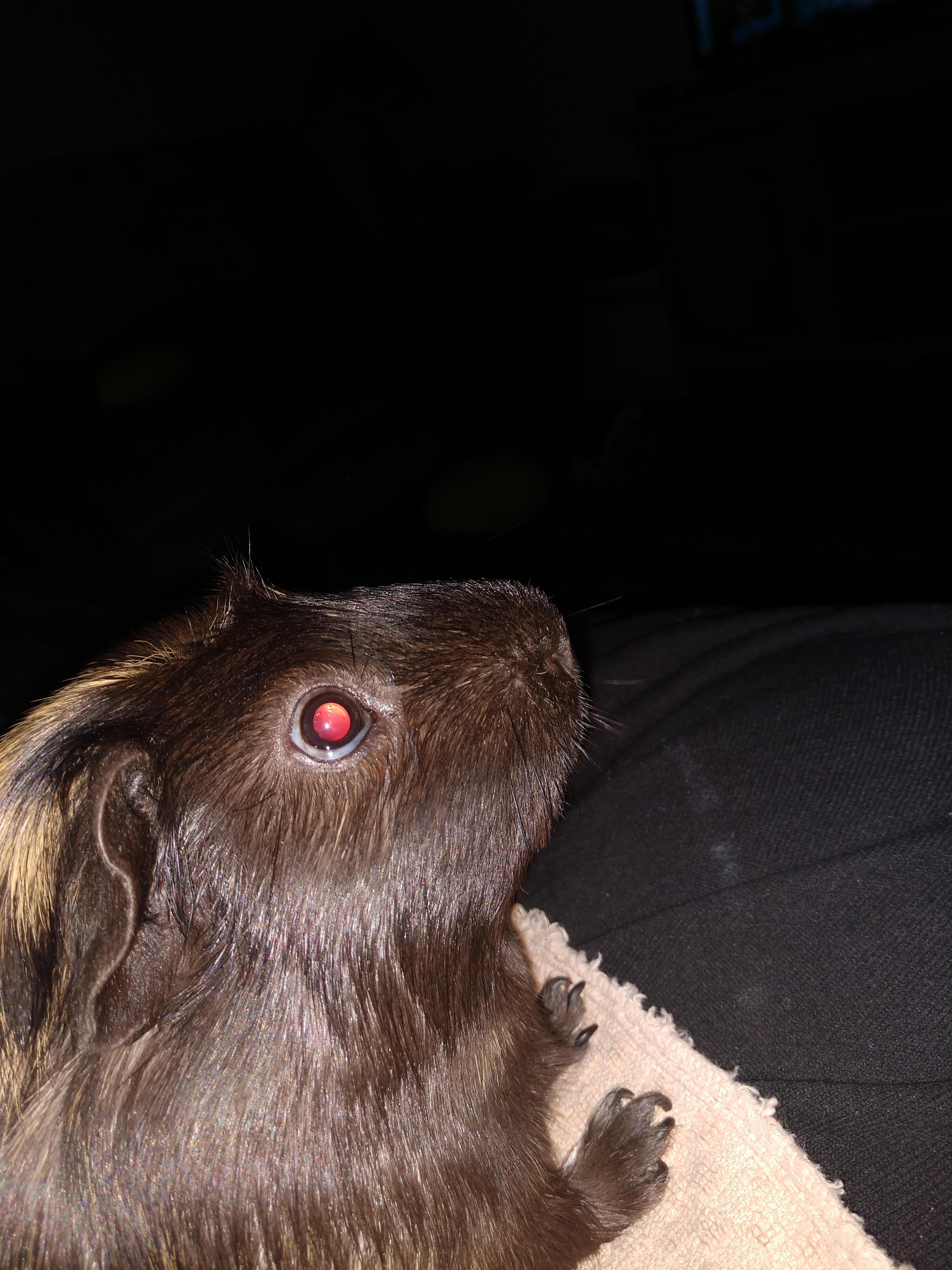 I'm glad you have such a strong bond with your guinea pigs!

I dare say, they will be happy to see you again too.
Top

I video called my daughter and they all got excited when they heard my voice. It was so adorable.
Top
Post Reply 249 posts