I predict a heart stealer (if she hasn't done so already!).
Top

She is a real beauty! Hoping she and Fuzz Butt get on well together. Nice pictures of kitty cats in the background too! I love it when they fit into the palm of your hand but slippery fast little mites! Hoping Dusty brings many years of happiness.
Top

She is so cute!
Top

Dusty has fit into the family quite well. Since Peek didn't really like any other pigs, she's spending most of her time near Fuzz. Fuzz hasn't started playing tag with her or anything, but I think she will. Especially since I've started giving her the Buprenorphine the vet gave me for VeBee. It's not everyday, and only a small dose (.15 mls) but it does seem to help her show a little more interest in life.

Sadly Peek passed away on the 12th of January. I'd had him not quite 5 years, and he was an adult already showing some arthritic changes when I adopted him. After months of giving him Pedialyte by syringe, the two of us became a lot closer. While he still ran when he saw me getting ready to pick him up, and he still tried to climb my arm once I had him, he settled down quickly when we got away from the cage. I miss him so much. He seldom, if ever, wheeked, but he was my chirper. I suppose it will be years, if ever, before I hear that again. He loved to stand on a brick and watch me as I passed back in forth in front of the doorway. He was probably hoping I was coming with more of the nummy Pedialyte or a carrot. I've taken the brick out for now. No one else is showing any interest in using it (for now). Rest in peace, little boy, until we meet again at the Rainbow Bridge. 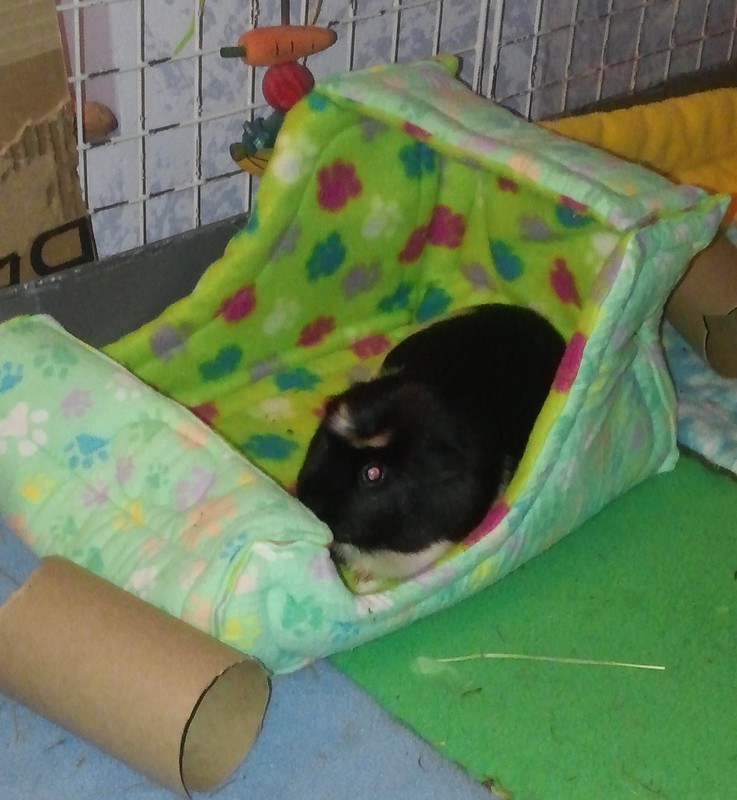 Dusty is indeed a little beauty. And a gray streak if she thinks we are coming for her. Or even if she doesn't, heeheehee. She has finally started taking lettuce from my hand, although once she gets it she's "gone". She's willing to come back for more, though, so I have hopes. I was going to add a new picture of her but have discovered I don't have any new ones. I'll have to correct that!

On the 19th, we added another little baby, about 2 weeks or so younger than Dusty. When Peek passed and my husband saw my tears, he asked if I wanted another baby. Ummm, duh! ;) At first, we were calling her Mocha, but after I saw her in natural light she became Belle, because she is so gorgeous. She's dark like cinnamon but has a lot more red in her coloring. 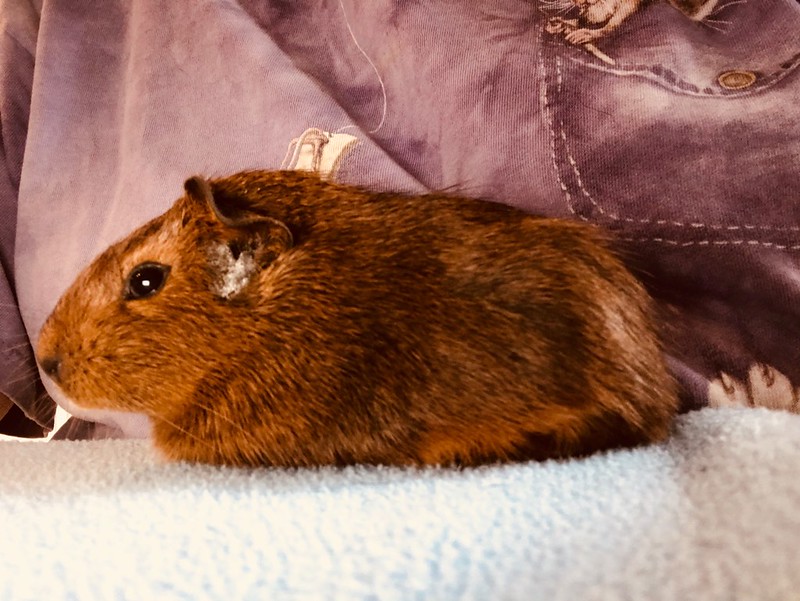 Unfortunately, both babies are suffering from a fungal condition, not surprising since they were housed with some of the same guinea pigs. They are both being treated with Gentizol, so the nasty spots should disappear soon. They do already enjoy each other's company. Where Dusty is, you can usually find Belle.

That's it for now. I'll try to get some new pictures taken of them all. I'm really bad about remembering to take shots. The Granddaughter and her girlfriend were here for a couple of nights early this month, and although I've complained about not getting enough pictures, did I remember to take any? NO! So anyway, the babies are here day in and day out, so I should be able to get some new ones.

Hopefully, in time, I'll have some new funny stories to tell.
Top

Pictures are always wonderful! I think you have a pretty good "guy". He sure cares about you!

Your young guinea pigs will be so much fun!
Top

Yes, the Mr. is definitely a keeper! I'm so glad he feels the same about me. We'll have been together 40 years in May. Wow!
Top

And my keeper and I have been together 42 years in February! It feels good to know you found the right guy!
Top

I'm not so sure how much of a keeper mine is, LOL, but we hit 44 years last November.
Top

Wow!! I'd call him a definite keeper then, no two ways about it. Congrats to all.
Top

I once again have a burrower! Flossie was the resident burrower, back before she died, and I've not had one since. Until I brought home Belle, who promptly taught Dusty. Now I have all three under the hay pad. I've moved the hay to hangers, but it hasn't helped much. Yesterday I gave them a stiff pad that they can crawl into/through. I don't know why the fleece tunnel isn't a more popular item, maybe it's too short. Anyway, since I gave them the pad yesterday, I've not seen a single "hole" under the hay pad. Maybe this is what I need to keep them out from under it. I'm keeping my fingers crossed.

As for the fungul infectons/spots, Dusty seems a lot better but Belle seems a lot worse. Dusty has one on her nose, kind of close to her eye so I'm being very careful when I put the medicine on it. She's growing hair back on the worst one on her hip. Poor Belle, it seems like I keep finding new ones every day. These spots seem painful to the touch for both babies, but especially the ones with the "scabs" on them. Or at least, they want me to think I'm killing them with the medicated q-tip.

I might be making up for it with some lettuce pieces afterward. They both take them from my hand and Dusty has started taking them from my hand in the cage. Belle, on the other hand, still won't come near me while she's in the cage and much prefers to take the lettuce from Dusty's mouth.
Top

Refresh my memory regarding if you've also treated for mites. I am sure you know how common they are too!
Top

Shoot! No, I've not treated for mites. Didn't even think of those. That's Ivomec/Iver-something, right? Are they old/big enough? They are still less than 300 grams.
Top

If they're less than 350 grams, you'll need to get kitten Revolution for them.
Top

As promised, here are some current pics of Dusty: 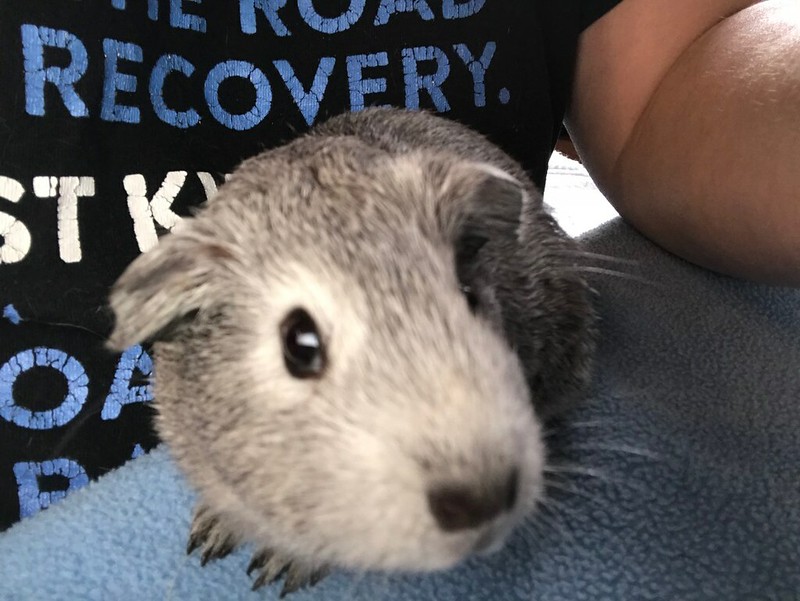 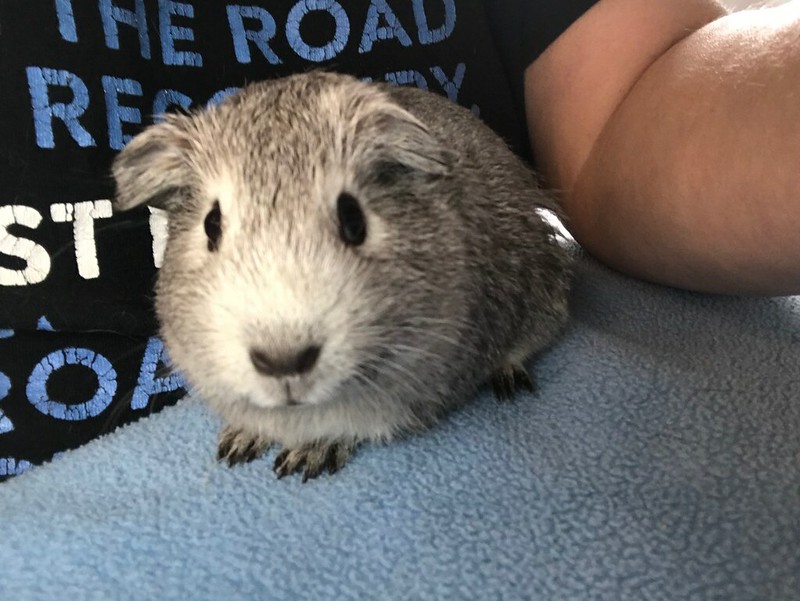 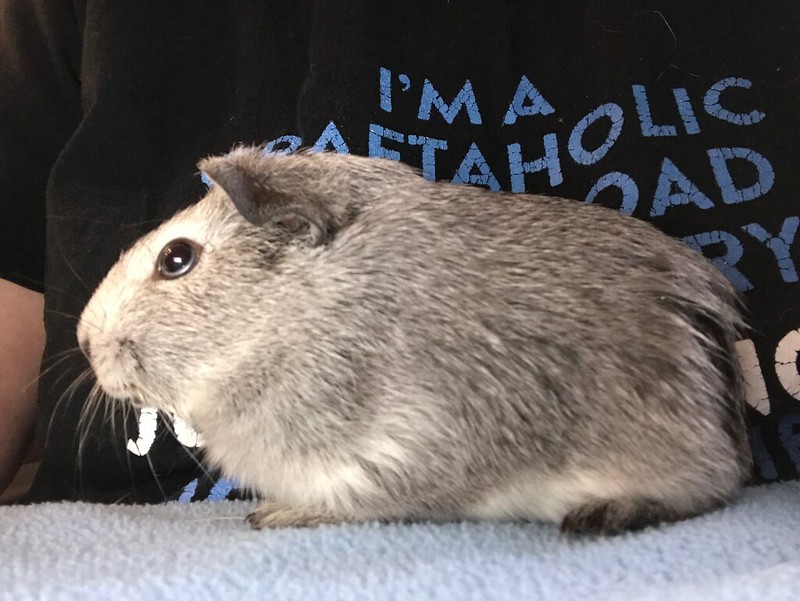 Thanks for the pictures! I especially like the middle one with the perky ears and smile.
Top

My favorite, too.
Top

I sometimes wish I could plug Fuzzbutt. She produces the mushiest poops. Nothing new, except that now she, or they, seem to be smearing them across the fleece. I can no longer wait the 3 days to flip, or 2 days to change out their quilts. It's just too gross looking.

Yesterday, I gave Fuzz a medicated shampoo. I usually use 2 towels to dry off the pig, plus one more to wrap them up in until they are mostly dry. Fuzz pooped and peed in all of them plus one more! And they weren't the kind of poops you can just shake out.

I think she hates me. I cannot hold her without using a pad between us because she poops and/or pees on me every time. I already have been very careful when picking her up because she usually has it stuck to her feet. The vet has me using Bene-Bac daily (1 cc) but so far, if anything, it's made the problem worse. On the upside, she has finally stopped biting me (although I've felt her bite and pull on the pad under her a couple of times).

Her fungal infection is definitely clearing up - a few small spot around her face and a few more around her body. I've pointed out to her vet the extra thin fur/hair on right hip and stomach several times. Since x-rays show no sign of cysts and she doesn't seem to be in pain, the vet isn't too concerned. The thin hair has been this way for months, or maybe longer. I tried rubbing Gentizol on it and the medicine made absolutely no difference. I never see her chewing or scratching at it, at least no more than any other areas.

She still runs from me in the cage, as does Dusty, but yesterday Belle actually let me pet her in the cage. Twice! I find that extra exciting. And speaking of Belle, I think I have a couple of recent photos of her. 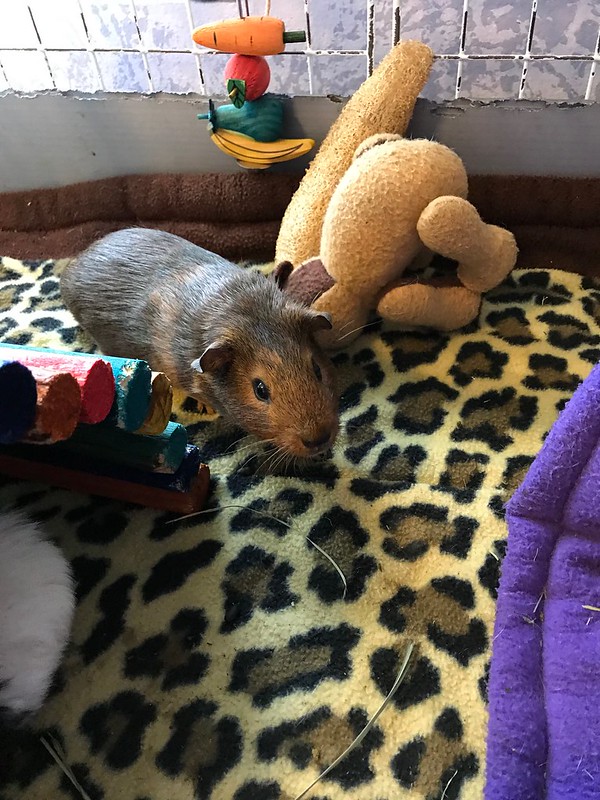 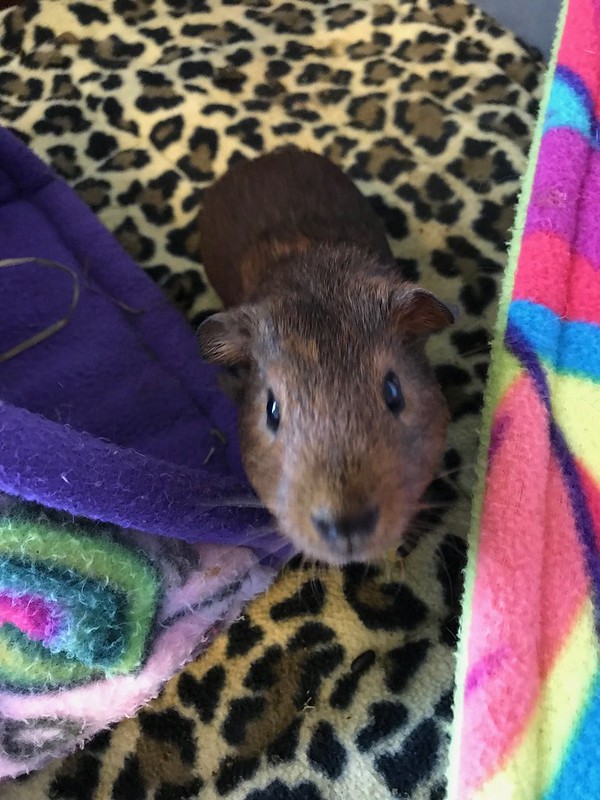 And a couple of Dusty: 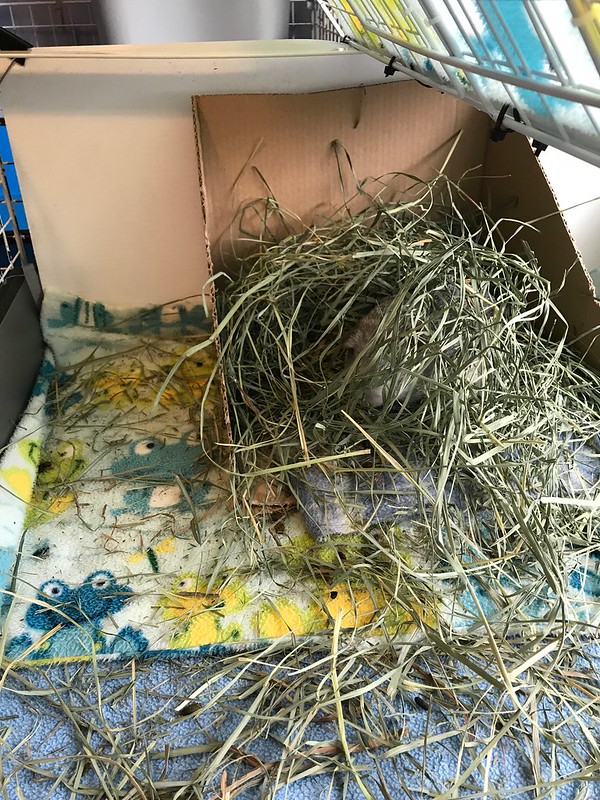 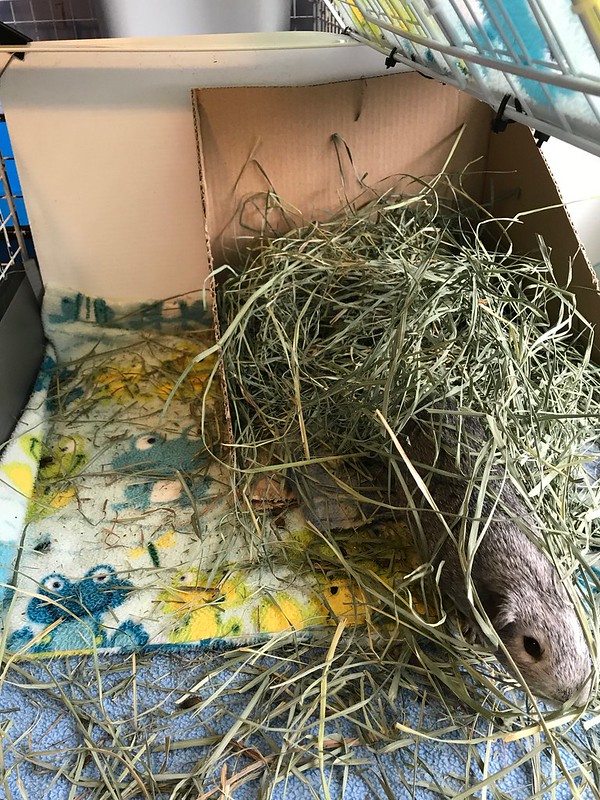 I tried to get some of Fuzz, but they didn't turn out. She's so hard to photograph!
Top

Your guinea pigs are so adorable!

I really hope the poops firm up. I can imagine this is discouraging for you (messy).
Top
Post Reply 179 posts